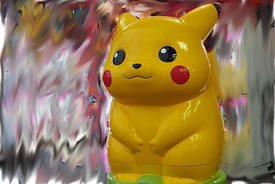 Each week, countless inspiring and informative stories are published about conservation successes or discoveries in nature and wildlife around the world. Here are some of the conservation and nature stories that caught our attention the week of July 11, 2016.

The incredible response to the mobile game Pokémon Go has greatly increased people’s time outside in nature, so scientists and natural history buffs are embracing the chance to help identify all the real animals players are finding too. The hashtag #PokeBlitz (a play on #BioBlitz) is now a trending hashtag where players can ask experts on Twitter about the real creatures they find.

A 13-year study conducted in the UK by citizen scientists and researchers at the University of Exeter discovered that light pollution from cities and streetlights pushed bud bursts of four common tree species to emerge a week earlier. This can be problematic for caterpillars that try to match their egg hatching to the bud bursts of trees. It can ultimately also affect the habits of nesting birds.

Listen to this 60-second science podcast to learn more >

Ever walked somewhere and wondered why the direction doesn’t feel right? It’s because humans and other mammals rely on head direction, place and grid cells in their brains to process sensory information, similar to rats and cockroaches. So the next time you spot a cockroach, before you squirm remember that the theory of convergent evolution makes us more similar to them than you might think.

A dinosaur skull belonging to the Ceratopsian family uncovered last summer has horns showcasing characteristics from two previously discovered species in the Badlands. Experts believe the find could potentially bridge the evolutionary gap between Centrosaurus and Styracosarus. Scott Persons, a paleontologist at the University of Alberta responsible for the find, is optimistic about finding more parts of the dinosaur’s body in summer 2016 to complete the skeleton. He's working on naming the dinosaur too.

See the magnificent skull get lifted via helicopter from the Badlands >

According to observations in the behaviour of 100 Barbary macaque monkeys conducted by the German Primate Center, older monkeys clearly prioritize relationships with their friends rather than test props such as animal toys, snow globes and food tubes. Although there is still more research to be done, potential similarities between us and our primate cousins are always fascinating to remember.