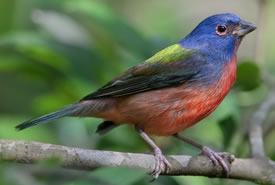 Each week, countless great stories are published about conservation successes or new discoveries in nature and wildlife around the world. This year, we're launching a new feature on Land Lines: the Friday Five, a weekly roundup of the top conservation and nature stories from around the globe.

Here are five stories that caught our attention the week of January 4, 2016:

What better way to start off the new year than with a retrospective of the previous year's successes? From stowaway snails to giant pandas, this Scientific American blog post provides an overview of just a few of wildlife conservation's highs, and lows, of 2015.

Why a painted bunting landed in Brooklyn

Scrolling through my Twitter feed one day, a photo of an incredibly colourful bird caught my eye. The picture was of an indigo bunting that has caused quite a stir in New York this week, as the species normally doesn't overwinter in the area. The story by Audubon explains why birds occasionally veer off course and end up in new locations.

I'd never really thought of it till this week, but what happens to spiders when temperatures plummet? As I warmed my hands around my cup of coffee one morning, this blog post by McGill University researcher Chris Buddle caught my eye.

Canada’s coverage of Conservation Data Centres (CDCs) has been completed with Nunavut joining the CDC network.

The Nature Conservancy of Canada has actively supported the establishment of CDCs across Canada since 1988. In addition to providing conservation status ranks for species and communities that help us prioritize our actions, CDCs are important partners in collecting field information and in conservation planning.

Many of us, myself included, like to put up bird feeders in our backyard for those stalwart species that overwinter in Canada. We think we're helping by providing them with an extra food source when most of the landscape is frozen over, but could we be doing more harm than good? This post by The Nature Conservancy (U.S.) explores the pros and cons of winter bird feeding.