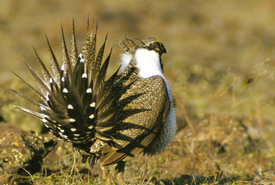 I expect that most of us are aware of the hazards that office towers and other large buildings in urban areas pose to birds. Buildings are not much of a problem in rural Saskatchewan, but fences are.

Those barely visible wires can be hazardous to animals moving around the landscape. They are of particular concern on a Nature Conservancy of Canada (NCC) property called the Wideview Complex, one of the last remaining sites in Saskatchewan where critically endangered greater sage-grouse can be found. How do we improve the visibility of those fences, and reduce the risk of bird strike injuries or deaths? The answer involves undersill trim for vinyl siding, some tedious work with cutting shears and a Conservation Volunteers event on the spectacular Wideview landscape. 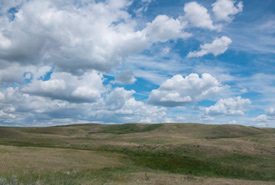 The Wideview Complex comprises 3,021 acres (1,222 hectares) within the mixed grass prairie ecosystem in the Milk River Basin of southern Saskatchewan. It’s just a few minutes’ drive from the northern boundary of the west block of Grasslands National Park and helps form a natural area buffer around the park. Besides providing habitat for the sage-grouse, Wideview is home to at least 11 other species listed by the Committee on the Status of Endangered Wildlife in Canada as being threatened or special concern. 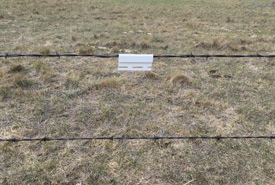 Now, back to the vinyl clips. In Alberta, the NCC team hosted a corporate Conservation Volunteers event with TransCanada employees, who made these fence clips by cutting lengths of vinyl undersill trim into three-inch segments. They then added reflective tape to one side to improve their visibility. Supplied with thousands of these markers, six volunteers and two NCC staffers clipped these vinyl markers to the barbed wire fences around the Wideview property: three on the top wire and two on the third wire. The purpose of these markers is to make barbed wire fences more visible to low-flying birds like sage-grouse, with the ultimate goal of reducing the number of deaths and injuries associated with fence collisions. 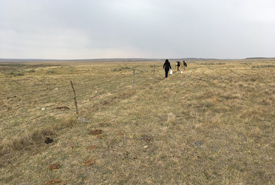 During our lunch break, I asked another volunteer, Caitlin Mroz, who lives in Val Marie, a village close to the main entrance to the west block of Grasslands National Park and about an hour drive from Wideview, why she had signed up for the event. Caitlin, who works for Parks Canada and the Prairie Conservation Action Plan, said the event offered her a chance to see an area she had not previously visited and to meet like-minded people she otherwise wouldn’t have had a chance to. 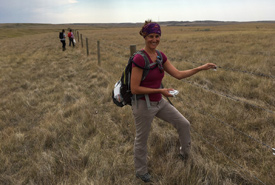 “I love seeing the vastness of the pristine native prairie, untouched for centuries,” she said. “A highlight for me was seeing a northern leopard frog — a species at risk — at the bottom of a coulee, as well as northern harrier, Swainson’s hawk and purple smooth aster in bloom. The landscape is beautiful and dramatic.”

Mike Burak, NCC’s program director for southwest Saskatchewan, estimates that we marked nearly five kilometres of fence. That sounds impressive, but it’s called Wideview for a reason. It was, however, a good start on improving the visibility of barbed wire fencing on the property — to the benefit of greater sage-grouse and the other animals that live here.