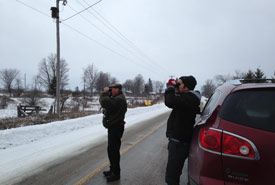 A ways up Highway 400 and across the top of Lake Simcoe from the Richmond Hill count circle (read about it in Part One), the Carden Alvar Christmas Bird Count took place on Saturday, January 2. It was a cold and dark morning when I left my house for one of my favourite Nature Conservancy of Canada (NCC) Natural Areas, at which I spend a great deal of time in the summer but rarely get a chance to explore in the winter. Needless to say I was very excited!

I hopped in a car with an old friend: expert birder and all-around Awesome Naturalist, Bob Bowles, and his birding partner Dave Lord, accompanied by fellow NCC employee Mike Francis. I’d only done counts in Guelph before and wasn’t sure exactly what to expect. 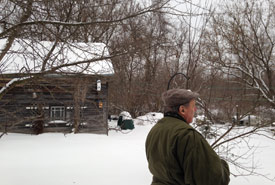 Knowing Bob I should have known the day would be full of jokes and laughs. He and Dave were like an old married couple, the way they bickered and teased each other all day long. Mike and I spent the most of the day in the back of Bob’s vehicle laughing at the camaraderie. In between those laughs, we saw some amazing things.

On our first stretch of backroad, I hollered at Bob to stop the car. I think all I could get out of my mouth was “Birds! Birds!” (very helpful). We all popped out and our eyes began following approximately 50 small grey-brown birds that were darting from the top of one spruce tree to the next. Too far away to get a real read with our bins, Bob pulled out his scope and set it on the party of birds high up in the trees.

Upon closer inspection, a small yellow patch on the bird’s side was revealed: pine siskins! They aren’t a guarantee in every portion of the count circle, so we were very pleased to get them, and so many of them, so early in the day. After recording our find, I peeked through the scope once more to enjoy the closeup of these adorable birds and was a bit taken aback to find them stuffing their faces full of seeds from the spruce cones. You could almost hear a Homer Simpson-like gobbling sound as they stuffed their cheeks full and scarfed down as many seeds as they could.

We had a successful day, spotting a number of American black ducks lazily paddling down an open river, blue jays twirling around in the bushes, crows flapping along overhead and a lone Canada goose (our only one of the day). We visited a popular feeder set up at a colleague’s house, and found her backyard alive with dark-eyed juncos, goldfinches, downy and hairy woodpeckers and American tree sparrows. 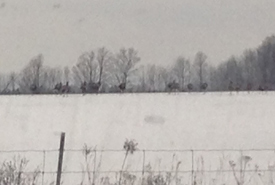 We waved to a group of 12 turkeys on our left. We screeched to a halt on a roadside to study a flock of mixed sparrows and finches, delighted to find the brilliant red of a purple finch and surprising white and black head of a white-crowned sparrow that had evidently decided to stick around for the holidays.

These were very exciting finds indeed!

But there’s nothing quite like being eluded on a Christmas bird count; it makes for some serious suspense. By about 2:30 p.m. we were starting to get pretty worried that we hadn’t yet spotted any ravens (common year-round in Carden) or snow buntings (a highlight of any Christmas Bird Count). I made it a personal mission to scan every snow-covered farm field and find those buntings, and described to Mike, on driver’s side window duty, just what he was looking for: a crazy flock of at least 30 white birds flying in sync, rising and landing in the fields.

I was thrilled when I got to start yelling again: “There they are! Stop!!!” A flock of snow buntings were spinning crazily through the air over a field, then landing long enough for us to give them a good count: 110! Close to when it was time to think about heading back, a raven swooped dramatically in front of the windshield. It was our first and last raven of the day and we were so relieved to see it!

Due to the late fall, warm winter and large stretches of open water in the Carden Alvar area, the species count of 45 and individuals count of 3,703 in this 24-kilometre-diameter count circle were way up from last year. New records for the circle included common loon, mute swan and wood duck. Other interesting sightings included a high number of bald eagles and rough-legged hawks and several northern shrikes.

All in all it was a fabulous day, with great company and a wonderful feast afterwards, and more than worth the drive from Guelph. Next year I’m tempted to do the Guelph AND Carden Christmas Bird Counts.

There’s no such thing as too much birding…is there?