Where have all the pollinators gone? 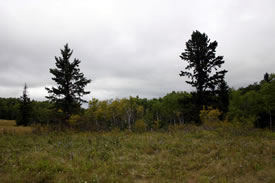 After a summer filled with ticks, mosquitoes and biting flies, I was ready for a pest-free pollinator survey at the Nature Conservancy of Canada (NCC) properties near Riding Mountain National Park this September.

Autumn field work can be quite lovely with the beautiful fall colours, comfortable temperatures and migratory birds moving through. But you can't always get what you want. The vicious thunderstorm that pelted my car with hazelnut-sized hail and forced me to pull over onto the side of the road just as I was leaving town forebode what was to come: crappy weather. I suppose that it was simply too much to ask for four weeks of rain-free field work this year though. I consider myself lucky to have had such nice weather in June, July and August.

Part of the reason I like studying pollinators is that they don't like bad weather. When it is cold and rainy they just curl up in their little dens, or hide under a flower or some vegetation till it warms up. That makes total sense when you're not much bigger than a raindrop yourself. Getting hit by hazelnut-sized hail would mean an early grave for you! Better to lay low for a while. Since I dislike doing field work when the weather is bad, the arrangement works out just fine. 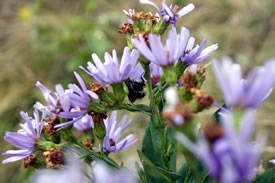 When I started my first survey it was cool, cloudy, windy and threatening to rain. Aside from a few bumblebees clinging to the undersides of Lindley's asters and sipping a bit of nectar to stay warm, there were no pollinators about.

The next morning was worse: it was cold and rainy but as it cleared up by noon I was still able to complete all my surveys. Wednesday and Thursday were slightly better as it didn’t rain at all but was unfortunately still too cold for much insect activity. 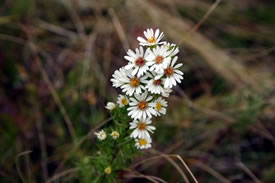 Despite the poor weather conditions and paltry number of pollinator visits, I still learned something valuable on this trip. The point of my research was to identify which flowers should be grown to provide pollinators with enough forage over the entire season. In September the main plant species in bloom are Lindley's and many-flowered aster so these two species should probably be included in any prairie restoration seed mix. These flowers provide overwintering queen bees with nectar and pollen till they are ready to hibernate. 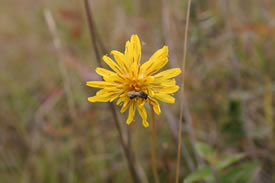 And so my summer of field work is at an end. This is pollinator biologist, Diana Robson, signing out and wishing all those bees, flies and butterflies (but not the mosquitoes) a safe sleep until spring!