Why turtles don't make the best roommates: A caution against keeping turtles as pets 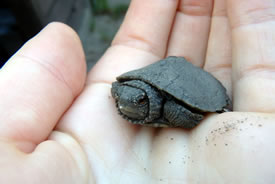 At the Nature Conservancy of Canada (NCC), we often receive inquiries from well-meaning Canadians wanting advice about how to help the animals and plants they encounter in their daily lives. Case in point: we recently received an inquiry on the NCC website from a family who had found a snapping turtle hatchling and was wondering whether it was best to keep it or release it to the wild. The family worried that since the turtle seemed to be showing signs of becoming tame, it would have difficulty surviving in the wild.

I know it’s tempting to keep turtles as pets because they’re so cute when they are small like this family's tooney-sized turtle, but turtles are actually terrible pets! They don’t stay small forever and, contrary to the myth, they don’t grow to suit the size of their aquarium. Snapping turtles are actually one of Ontario’s largest species of turtle and can grow to nearly 50 centimetres shell length (not including tail and head!), around 35 pounds, and they are thought to live upwards of 100 years in the wild. 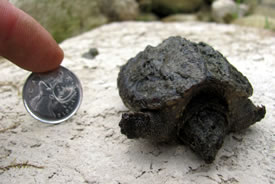 As turtles get bigger they are also much more difficult to care for because they require very large aquariums (kiddy pools even!) and they are very smelly and messy creatures. Turtles can also carry salmonella bacteria that may pose a health risk if you’re not carefully washing your hands after handling the turtle or cleaning its aquarium.

I used to have a pet turtle so when I talk about them being terrible pets, I really mean it! My turtle was actually a yellow-bellied slider — a species normally found down in the southern U.S. that someone let go in the wild in Ontario. I was working on a turtle project at the time, found this turtle and decided to take him in as my pet because he couldn’t stay in the wild and needed a home. I kept him for three years but even I, a turtle lover, finally got tired of constantly cleaning the aquarium! I’ve since found him a good home at a turtle sanctuary where he has a very large outdoor pool and lots of space to roam with other turtles.

The other thing to consider is that our wild animals belong in the wild. Removing turtles from the wild is a big threat for several of our native turtle species. They’re so cute that people want to keep them as pets but this means that there are now so few of them in the wild that the species are struggling to survive in the wild in Ontario. Snapping turtle numbers are declining in Ontario and the species is now considered a species at risk of extinction in Ontario — so we really do need every individual left in the wild where it has the best chance of breeding future generations of turtles.

With all this in mind I suggested to the family in question that they head out on a family outing, go back to the location where they had found it and let it go back into the wild. I explained the turtle would have the best chance of surviving the sooner they did this because it will be more likely to have kept its wild instincts and because it needs plenty of time to fatten up and find a good place to overwinter before the weather turns cold.