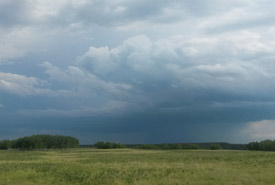 In 2015, I had the good fortune to spend a second summer conducting pollination research on beautiful grasslands in western Manitoba. As described in my previous post, I have been investigating landscape effects on pollination service in fragmented prairies.

When people hear that I’m researching pollination, nearly everyone’s mind jumps to the current honeybee crisis, which has been receiving lots of well-deserved media attention. However, in the area where I worked, native pollinators are of prime importance. Over both summers, I encountered only three introduced honeybees, while the rest were wild bees of all types.

Generally, bees require warm weather to be active, and so our sampling was best done on sunny days without too much wind. Those familiar with the prairies know that summer storms can build up quite quickly, and more than once we had a promising day interrupted by unforeseen downpours.

Fortunately, sunny days aren’t rare in Manitoba, and we were able to complete sampling in both early and late summer. 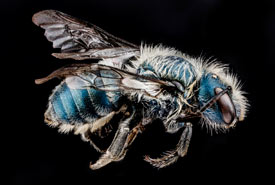 Wild bees often emerge seasonally, so the communities shift through the summer. Among others, in early summer we found many ground-nesting miner bees (genus Andrena), many beautiful blue cavity-nesting mason bees (genus Osmia) and of course, the large bumble bee queens who establish seasonal colonies.

Later in the season we often encountered smaller worker bumble bees, many leaf-cutter bees and the males of many species. The prairies have some of the highest bee diversity in Canada, and I found over 75 species of bee at my seven sites alone. 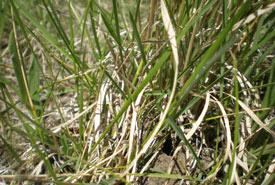 Can you spot the entrance to the miner bee nest in this photo? (Photo by Marika Olynyk)

As with other animals, if we want to conserve native bees, we must conserve their habitats. Habitat loss and fragmentation have been identified as the main causes of declines in wild bee populations, and these forces are particularly at play in the prairies.

It is helpful to think about bees requiring multiple, complementary types of habitat in order to survive. They need flowers for food, but also need appropriate nesting habitats. Bee species vary widely in their nesting needs, from burrows in the soil to hollow woody stems, and nesting sites may be in different habitats than where they get food.

Maintaining bee diversity in a landscape therefore means supporting not only floral diversity but also nesting habitat diversity, and making sure that the two are close enough together. 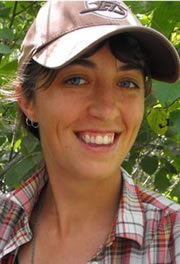