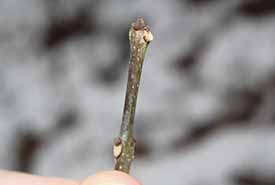 Many trees are easier to identify without their leaves.

When you’re out for a winter hike, it may seem that there aren’t many clues to identifying the trees around you. Because trees are sporting bare branches, you might think they aren't as easily distinguishable as during the summer, when leaves can be used as the main identifier.

However, by focusing on the tree’s shape, twigs, buds and bark, and with the help of a field guide and or an app like iNaturalist, you’ll soon become a pro at identifying trees in winter.

Learn about the trees in your neighbourhood, and you’ll soon begin to learn their particular shapes by quickly scanning them, even at a distance. A quick way to narrow down the tree species is to first determine whether the tree is coniferous (keeps its needles throughout the year) or deciduous (loses its leaves in the fall).

If it’s deciduous, note the shape that the branches grow in. Do they stretch out horizontally from the trunk, or upwards? Does the outline of the tree bend gracefully, like an American elm, or is it thick and stocky, like white ash? 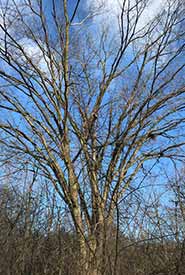 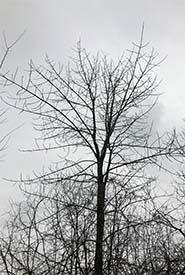 Keep in mind that the direction the branches grow in can be influenced by the conditions it is growing in (for example, branches may spread out if the tree is in an open area). 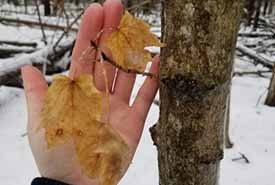 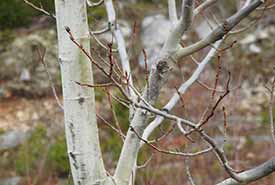 Next, look at the leaf arrangement on the twigs. Are the buds (that will turn into leaves in the spring) arranged opposite or alternate?

Alternate arrangements have one leaf per node, alternating along the twig. Many tree families with alternating leaves include poplar, oak, hickory, birch, beech, elm and cherry. 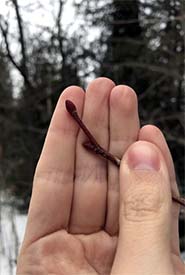 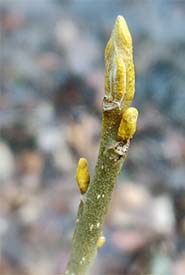 Depending on the time of year, buds may already have formed that will also help you ID the species. If so, note their shape, size, colour and form. Are they scaly? Covered in light fur? Is there a terminal bud (i.e. a bud at the end of the twig)?

Trees that have easily identifiable buds include oak (clustered bud ends), basswood (bright red buds) and bitternut hickory (yellow) buds. One big advantage of learning to identify buds is that they are usually very similar on young and old trees of the same species. 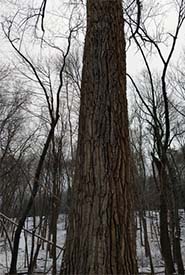 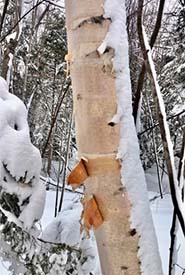 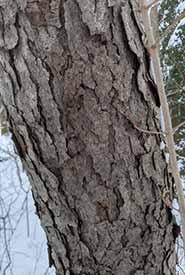 Some trees are easily distinguishable by their bark texture and colour. Cottonwoods can be identified by their furrowed bark, while white birch's silvery gleam is a tell-tale clue. The bark of a black cherry tree of eastern Canada looks a bit like burned cornflakes.

When walking around the tree, look on the ground or on the branches to see whether it has dropped any leaves, berries or nuts. Sometimes you can even find these under the snow. These will also be important clues. Often, winter identification is a process of elimination that can help you can narrow down the species.

It's also helpful to know the types of trees most likely to occur in your local forests. Remember that parks may have non-native trees, which can be more difficult to identify. Fortunately, apps like iNaturalist have a growing number of winter observations. A good picture of the bark or buds can quickly help you to identify trees in the winter.

Posted in: Time for nature, Plants