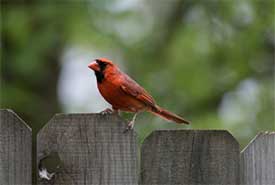 Cardinal on the fence (Photo by Nathan Anderson from Unsplash)

How to protect avian biodiversity and our well-being

Are the early morning songs of black-capped chickadees a welcome sound? Does watching a flurry of happy finches and jays feasting on berries bring you joy? If you answered yes, then it may come as no surprise that human happiness is now scientifically linked to our feathered neighbours.

The link between bird diversity and human happiness

Researchers at the Senckenberg Biodiversity and Climate Research Center, German Center for Integrative Biodiversity Research and the University of Kiel studied over 26,000 adults from 26 European countries and pored over the European Breeding Bird Atlas. The findings were nothing short of fascinating. “The happiest Europeans are those who can experience numerous different bird species in their daily life, or who live in near-natural surroundings that are home to many species,” said the study’s lead author, Joel Methorst.

The study presents two explanations for how higher bird diversity is linked to higher life satisfaction within humans. First, there is the multisensory experience of the bird community as their fluttering wings and vocalizations fill the air. Second, living in a  landscape that supports this bird diversity influences human well-being. If you’re still looking for more reasons to love the quacks of mallard ducks and chatter of magpies, then perhaps this might do the trick: the researchers even suggest that a rich bird community may contribute to human happiness on a similar level as income.

Since the 1970s, the beneficial effects of spending time in nature has been well researched. It’s come to light that nature increases cognitive function and decreases blood pressure, stress hormones and symptoms of anxiety and depression. But this is the first time that experiencing biodiversity has been shown to improve human well-being on a continental scale. With all the mounting evidence of nature’s connection to human health, it is clear that protecting the natural world and its biodiversity, including birds, will help us live healthy and happy lives.

Before we dive into conservation successes and how you can be a part of the solution, it’s important to note the struggles that many bird populations have faced over the last 50 years. A 2019 study published by Science Magazine found that North America has “a net loss approaching 3 billion birds, or 29% compared to 1970 abundance.” The North American Bird Conservation Initiative released a report on the state of Canada’s birds in 2019 that showed the staggering loss of shorebirds, grassland birds and aerial insectivores (birds that eat insects). But it isn’t all bad news; populations of waterfowl and birds of prey have increased thanks to ongoing conservation efforts and wetland stewardship. The report repeatedly calls for the cleaning of waterways and oceans, increased habitat protection and calls to action on mitigating climate change.

In November 2020, the federal government committed up to $631 million over the next decade toward protecting and restoring vital ecosystems. This includes the Natural Heritage Conservation Program (NHCP), a public-private partnership designed to advance privately protected areas in some of the country’s most cherished landscapes. Launched with a $100-million investment from the Government of Canada, the program is administered by the Nature Conservancy of Canada (NCC), with contributions from partners like Ducks Unlimited Canada and the country’s land trusts. Wildlife Habitat Canada administers the land trust portion of the program, the Land Trust Conservation Program. NCC will work with the program partners to identify land for conservation and raise the funds to match the government’s investment 1.5:1.

Throughout Canada, there are nearly 600 locations that have been identified as Important Bird Areas (IBAs). IBAs are designations for sites that are home to large bird populations, threatened and/or endemic species. The champions of IBAs are the local volunteer caretakers that participate in monitoring bird populations, collecting data and raising awareness about bird conservation. But this isn’t the only way you can help bird species.

Many Canadians decided to join the citizen scientist movement in 2020 in an effort to get outside and reconnect with nature during the pandemic. So much so that the flora and fauna ID app, iNaturalist, reached a record 50 million observations as of September 2020. But, taking a photo and identifying a bird species on an app isn’t just for fun. This information is actually being used for biodiversity research and monitoring on a global scale. Whether you embrace your inner scientist, get busy IDing birds on apps or simply appreciate these animated and resilient creatures in your backyard, giving back to our local birds is always a great idea. After all, they do make us happy.

How can you support birds in your community?

1. Find an IBA close to you using this interactive map and become a caretaker.

2. Be a citizen scientist by using the iNaturalist app and participate in citizen science projects with Cornell Lab and Birds Canada.

3. Prevent birds strikes on your windows with these easy solutions and help save the lives of millions of birds per year.

4. Separate pets from wildlife by keeping cats indoors. Domestic cats kill approximately one to three billion birds per year in the U.S alone.

5. Reduce your consumption of single-use plastics. Plastic pollution has a significant negative impact on some bird populations.