Birding by ear: What birdsongs tell us 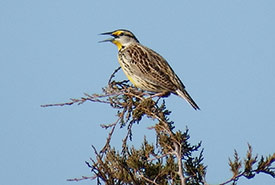 Have you ever been out walking and heard birds singing and wondered which bird was making which sound? Or perhaps you’ve been sitting outside on a summer’s evening and heard a persistent bird calling, but you weren’t sure what species it was? Being able to identify birds by the sounds they make is referred to as birding by ear, and usually you begin by learning the songs of the common birds in your area.

Let me back up a step and explain why birds sing, since part of learning a bird’s song is understanding why the bird is making the sound in the first place. 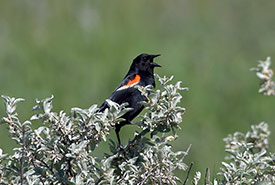 Why do birds sing?

In the case of songs, only songbirds sing; songbirds are all the species included in the order Passeriformes, which includes robins, chickadees, warblers and sparrows, among others. The main reason that songbirds sing is for territorial defense. Specifically, a male bird will claim a small patch of land as his own and will use his song to tell potential rivals that this little patch of land is his. Females then choose which male they would like to pair with based on the quality of his territory and, in some species, how well he sings his song. So, if a male can defend a high-quality territory, he is more likely to have his choice of female for a mate. Also, since the song each species sings is distinct, people can eavesdrop on these conversations to identify the bird species. 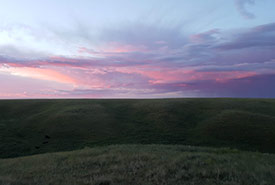 What is a point count survey?

So why is this important? In addition to solving that niggling mystery of who is calling on a summer’s evening, being able to identify birds by their songs is an important tool for monitoring their populations. One of the main ways that scientists determine the abundance of bird species (and subsequently whether the population has changed over time) is through surveys that rely on being able to confidently and accurately identify birds by ear. The most common survey type using this method is called point count. This involves the observer standing in a predetermined location for a set amount of time and counting all the birds both heard and seen within a specified distance. Point counts usually start around dawn, since this is when birdsong activity is at its peak. And sometimes due to lighting or other factors, the only way you’ll know a species is present is because you hear it singing. 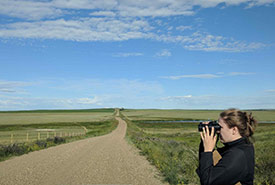 Point counts are used in many projects, ranging from the continent-wide North American Breeding Bird Survey (which is the primary source of data for determining long-term population trends of North American birds), to more local projects, such as the Nature Conservancy of Canada Saskatchewan Region’s grassland bird monitoring project that takes places on three large grassland properties.

Free resources to develop your birding by ear skills

If birding by ear is a skill that you would like to develop, there are many resources available. One of the main tools I use when training new recruits to bird by ear is Dendroica, through NatureInstruct. This free online platform hosts multiple photos and sound media options for each species of bird in North America. You can create customizable lists of certain species (e.g., only grassland sparrows) to help focus your efforts and prevent getting overwhelmed, as well as take quizzes to test how well you are remembering everything. After listening to a variety of recorded songs of the same species, you will eventually get to the point that you will know the species by ear when you hear it. But this does take practice. 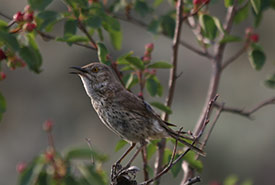 Another good tool is the Audubon Bird Guide app. This is a free digital field guide (available for both Android and Apple devices) that includes photos, songs and calls, range maps, and other information for North American birds.

Calls are the sounds birds make to communicate to one another for reasons other than territorial defense (which is the purpose of songs). These reasons include informing other birds of a nearby predator, scolding the predator so it leaves, or checking in with each other to pinpoint proximity and location.

Put your birding skills to use for conservation

Once you feel confident in your ability to identify birds by their songs, there are lots of citizen science projects that use point counts or similar surveys as their main form of data collection and have most of their data collected by volunteers. These include:

Even if you decide you only want to learn to bird by ear for you own enjoyment, it is well worth it. Knowing which birds you’re hearing will open a whole new world for enjoying nature and appreciating the complexity of the lives of our feathered friends.