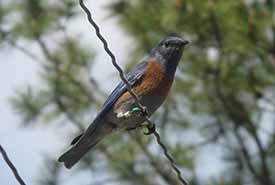 I have a complicated relationship with western bluebirds.

I know that sounds strange, because who doesn’t like bluebirds? Their vivid plumage and soft calls are acclaimed as harbingers of spring and symbols of happiness. As Henry David Thoreau once said, “If the warble of the first bluebird does not thrill you, know that the morning and spring of your life are past.”

In fact, the three species of bluebird (western, eastern and mountain) are among the most beloved birds in North America. There aren’t many other species with multiple grassroots groups, like the North American Bluebird Society and its many affiliates, dedicated to their conservation.

But after spending three years in British Columbia, studying the migration patterns of western bluebirds for my doctoral degree, I’ve gotten to know these birds maybe too well. And in those three years, there were many moments where they tried my patience…to the extreme.

I became interested in the western bluebirds of the Okanagan Valley because they are partial migrants; some individuals migrate south in the fall, while others stay on the breeding grounds year-round. The first year of my study, I arrived in BC in late January, excited to begin collecting data. It didn’t take long to find places where small groups of bluebirds could be reliably seen, picking dried berries off trees and drinking water from icicles. Although bluebirds are among the first birds to arrive in the spring and last to leave in the fall, it was strange to see their vivid colours juxtaposed against the winter landscape. 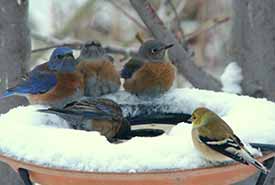 Western bluebirds (and one American goldfinch) huddle around a heated birdbath on a cold winter day in the Okanagan. (Photo by Eva Durance)

But while finding the birds was easy, the next part of my plan proved anything but. To learn about the birds’ migration behaviour, I needed to catch them, take a small sample of toenail for analysis in the lab, and mark them with coloured leg bands for future identification.*

To catch small birds, the standard approach is to set up a mist-net and then use some sort of stimulus, like song or alarm calls, to draw the birds toward it. These nets are very fine, so birds often don’t see them until the last minute and wind up tangled in the mesh.

But I quickly learned there was a flaw in using this approach to capture bluebirds. Finding the right stimulus to draw them towards the net was almost impossible because western bluebirds are, at heart, wimps.

For many other bird species, the alarm call of the black-capped chickadee is an excellent stimulus. Research has shown that numerous species pay attention to chickadee alarm calls; when birds hear it, they head toward it to investigate the threat. And in some ways, western bluebirds were no different. It was clear that they recognized the chickadee call, because the second they heard it, they froze.

But then they would unfreeze, drop lower into the tree they were occupying, and go about their business. They showed absolutely no interest in investigating the call. Rather, like ostriches, they buried their heads in the metaphorical sand and hoped the danger would pass.

Another classic way to attract birds is using food. To maximize my chances, I went so far as to cook for the bluebirds, making a special trip to the grocery store, then spending an hour in the kitchen whipping up some delectable bluebird banquet. But my home cooking failed to meet with their approval; many other species helped themselves, but I never saw a bluebird anywhere near the feeder.

Without a way to convince birds to approach your net, mist-netting is a rather futile endeavour. The chances that a bird will blunder into nine metres of net, rather than flapping merrily through the kilometres and kilometres of unimpeded space around it, are pretty low. 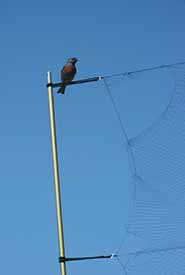 A male western bluebird taunts me by perching on my mist net. (Photo by Catherine Dale)

The most frustrating part was that bluebirds seemed to be everywhere, except where I wanted them to be. Over the course of that winter, they perched on my car, they perched on the net poles, and in one memorable case, a bird perched on the net itself, swaying to keep his balance as it moved with the wind. After working 10 hours a day, every day, for six weeks, I netted a total of seven bluebirds: a catch rate of approximately 0.017 birds per hour effort.

But finally, spring arrived, and I thought my luck might be about to change. At the very least, the work would be a lot warmer, but I would also now have an advantage. Bluebirds are cavity nesters, historically found nesting in holes in trees and snags. However, they are just as willing to build their nests in artificial cavities, otherwise known as nest boxes. 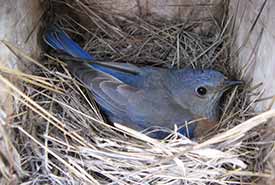 A female western bluebird sits on her nest inside an artificial cavity (nest box). (Photo by Catherine Dale)

At last I had something I could use to lure the birds toward the net. No longer was it nine metres of net against the entire outdoors; rather, it was nine metres of net against the small territory around a box. To stack the odds further, I used a wooden decoy and recording of bluebird song to convince the birds there was an intruder in their space.

Suddenly I found myself experiencing a different side of the bluebird personality. Gone (mostly) were the docile wimps of the winter. In their place were fierce, angry birds, adamantly defending their territories against the wooden usurper. 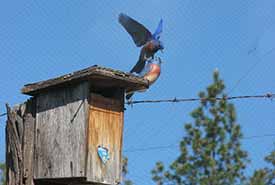 A territorial male bluebird defends his nest box from a wooden decoy. (Photo by Catherine Dale)

But even then, they managed to elude me. Bluebirds are birds of the open country, and nest boxes are typically placed in fields and wide clearings, where the birds can survey the ground for insects from a convenient perch. Unfortunately, these wide-open spaces also made it easy for them to see the mist-net. This, combined with their impressive agility, meant that they frequently swerved over, under or around the net at the last minute, avoiding capture.

Over three years of PhD fieldwork, I spent about 18 months butting heads with the western bluebirds of the Okanagan. But over the course of these many hours of frustration, I built up a deep affection for them as well as a healthy respect for their agility, stubbornness and ability to outsmart me. And now that I no longer need to catch them, I can truthfully say that the warble of the first bluebird thrills me again.

*Ethical note: Research has shown that the lightweight leg bands used to mark small birds typically do not affect their survival. All capture and handling of birds was approved by the Queen’s University Animal Care Committee, banding was conducted by a qualified bird bander, and birds were held for no longer than 15 minutes. 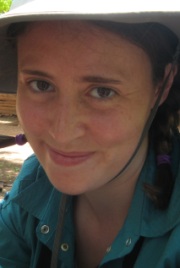