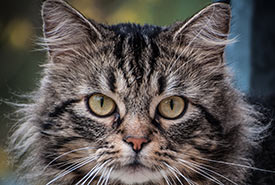 Ever wonder what your cat is thinking? (Photo by Pixabay)

Have you ever wondered what your cat is doing and where it’s going when it’s outside? For my master’s research at the University of Guelph, I joined a team seeking to answer these questions using custom-built cameras. These cameras are the size and weight of a large egg and attach to the cat's collar, resting just below its chin. We call them “catcams.” 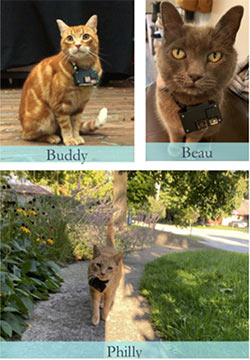 Meet some of our participants! (Photo by Marlee Pyott)

Pictured on the right are our participants. Buddy is an important member of the research team. He spent much his summer in 2020 testing our cameras and modeling for our advertisements.

Beau proudly posed for his mom while wearing our catcam. Beau was flattered that we wanted to share his handsome picture!

Philly is an adventurous participant who removed our camera after 15 minutes and immediately went on a rooftop adventure!

I love cats! They have such unique personalities, goofy traits, and they provide a strong, loving companionship. Yet, there is another side to cats that we don’t always like talking about — their wild side!

Over the past summer, I spent much of my time talking with cat owners who allow their cats unrestricted access to the outdoors. I learned so much, especially about how passionate they were about their cats. They simply want to do what they feel is best for their cat. For them, it means letting their cat outside. They do this for a wide variety of reasons, including allowing their cat to engage in natural behaviours, such as hunting, climbing, urinating, exercising or simply providing their cat with entertainment.

But did you know that outdoor cats are efficient hunters too? We often only think about cats hunting birds and mice, but they actually hunt a variety of animals, such as frogs, butterflies and chipmunks.

Sadly, outdoor cats are estimated to kill a staggering number of animals every year. In Canada alone, after habitat destruction, cats are thought to be the second largest contributor to wild bird mortality.

Cats with unrestricted outdoor access can also spread many harmful diseases to other cats, animals and even their owners. They also face other risks, including being attacked by predators, such as coyotes, or being hit by a vehicle. My research focuses on learning about the good and the bad of allowing cats to roam freely outside.

Have you ever thought about attaching a Go Pro to your chest and then just going about your day? What would you see? You would probably see your daily habits, what you ate, where you went, where you slept and for how long, who you met, and what interesting things you’ve been up to. That is what I saw on the catcams…except from the point of view of a cat.

Over the summer, our team captured thousands of hours of footage showing what cats were doing as they wandered around their neighbourhoods. Watching all the footage was an incredibly lengthy process, and even with a large team of eager students, we have only managed to watch a portion of it to date. 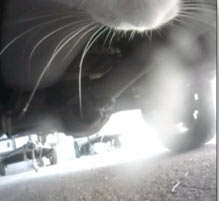 Image captured from a Catcam showing a cat resting underneath a vehicle. (Photo by Marlee Pyott)

So far, we have seen cats frequently walk across roads (even busy ones), eat unknown substances that might harm them, sit under cars (or climb inside!), enter unknown places, walk through construction sites, and we have seen them encounter other animals. We have also seen cats hunt. Some cats hunt a lot, with eastern chipmunks being one of their favourite prey items, but we have also seen them capture insects, shrews, mice, a young rabbit and a couple of adolescent robins. In total, we have witnessed 24 animals captured by 10 different cats. However, since we have footage from 39 cats, we expect to see a lot more. When all the footage has been watched, we will have learned a lot more about what cats are doing outside and have some insight into their impact on local animal populations.

For those interested in converting an outdoor cat to an indoor cat, there are many options, such as leash training, using a tether, or building your cat its own personal outdoor retreat, called a catio. You can also enrich your indoor environment using various toys to encourage your cats’ natural instincts to run, hunt, scratch and climb. 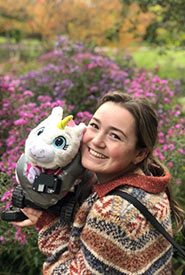 Marlee Pyott always had a passion for the outdoors and helping animals.