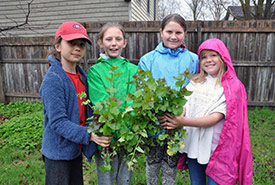 When I turn on the TV or read online news lately, I often overlook the positive stories because they’re often overshadowed by the negative ones. But they are there, sometimes right in our neighbourhood, or even from people within my circle.

A few months ago, my colleague Erica Thompson told me about her partner’s 12-year-old daughter, Evening, and her friends’ efforts to combat climate change. It turned out to be a story of a whole community coming together.

“I told my dad [Simon] how I was feeling, and he said I should find something to do, to be active. My first idea was to tackle invasive species in my village [in Creemore], and I picked garlic mustard,” said Evening. She had learned about invasive species at Free Spirit Forest and Nature School, which she attends once a week in Colllingwood, Ontario.

Over the spring and summer of 2019, Evening and her friends Izzy, Hazel and Dryden tackled several projects. They pulled invasive garlic mustard from private yards for a donation and creatively raised money to buy trees to plant for sequestering carbon. They served their community under the name of the Climate Change Squad.

A great opportunity to amplify their work presented itself at an upcoming Words in Woods, Dunedin Literary Festival, which was organized by Evening’s father. The youth used the money they raised to buy 100 native sugar maple seedlings from Not So Hollow Farm to give to festival goers to take home and plant.

“People were really excited and motivated to donate and support our work. [They] thought it was really cool that kids were trying to do something so active and important,” said Evening.

Their passion inspired many people, including Doug Finley, a volunteer fundraiser with the Nature Conservancy of Canada in Ontario, and his wife, Emily Arturi. 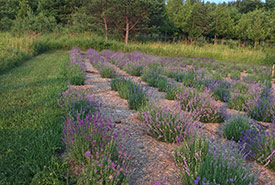 “We have 20 acres of property north of Creemore, and two years ago we decided to keep bees. And then we thought of planting lavender. Both the bees and the lavender are doing well,” said Doug. “We’ve also been planting a lot of trees to shade the cold-water creek along our property that flows from Temperance Hill into the Mad River.”

The couple donated the lavender clippings from their annual pruning toward the Climate Change Squad's fundraising effort.

“It’s so amazing to meet strangers who want to help,” said Evening. 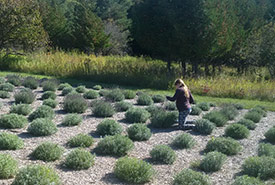 Over the next few weeks, Evening and her father visited Doug and Emily to gather more clippings, which were made into sachets to be sold at the local Creemore farmers’ market. Proceeds were funnelled back into their tree planting initiative.

Emily shared some of the Climate Change Squad’s ideas with her school’s Green Team, in hopes of motivating more good work for the planet. Evening says she just wants to keep fundraising and plant as many trees as possible.

“Protesting [for climate change] is good, as long as people eventually listen. Planting trees can help right now, as it is in the present, not the future. Even if you are super busy, you can still do something. In one hour of fundraising, you can raise $50 and that could mean 30 trees go in the ground,” said Evening.

To me, those thoughts are wise beyond her years. Although climate change seems like a big and vague concept to grapple with, and personal efforts feel like a drop in the ocean, small positive changes like Evening’s and her friends’ add up. After all, little drops make the mighty ocean.

To learn more about Evening’s efforts, visit her website.