Canada is a nation bordered by three oceans: Pacific, Arctic and Atlantic. In many ways, the habitats, local culture and economies are shaped by them. Often when those of us who don’t live near the shoreline think of oceans, we picture a vast expanse of deep, open waters. Besides offshore ecosystems, coastal areas are teeming with life as well. 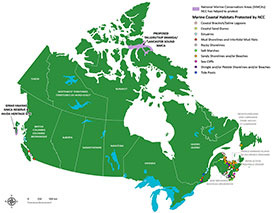 To date, the Nature Conservancy of Canada (NCC) has protected more than 450 kilometres of ocean coastline on properties in British Columbia and the Atlantic provinces. Take a tour through some marine and coastal habitats and get to know the species that live in the area.

An estuary occurs where a river meets the sea. These transition zones where fresh and salt water mix are very productive and support many different species. Many estuaries are under threat by coastal development. 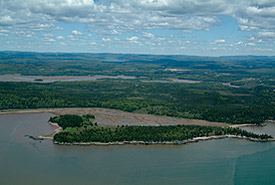 Salt marshes are coastal wetlands that are covered by salt water or brackish water brought in by tides. In the Maritimes, cordgrass stretches over many of these marshes, giving the landscape a prairie look. Salt marshes, together with seagrasses and mangroves (found in tropical regions) are coastal ecosystems that boast high biodiversity and sequester large amounts of carbon, and are often referred to as “blue carbon.” Thanks to salt marshes, upland areas are protected from storm surges and floods. In Nova Scotia, NCC has protected habitat in southwest Nova Scotia. The area is home to a rare salt marsh shrub called eastern baccharis, which is only found along a 25-kilometre stretch.

NCC’s Musquash Estuary, located in New Brunswick, is NCC’s largest conservation area in Atlantic Canada. There are 2,000 hectares (5,000 acres) of marshes, coastal forests and beaches in surrounding areas. Musquash is designated as a federal Marine Protected Area. It is a haven for migratory birds, waterfowl and birds of prey.

In British Columbia, the Campbell River Estuary has always been one of my favourite reclamation success stories. The site was once heavily used by industry. This left the estuary and nearshore virtually lifeless and stripped of much its original biodiversity. But through partnership and many years of hard work, the shoreline and intertidal areas have been revived to a bustling hub of nature. Today, marsh wrens flit through the thickets, black bears frequent the area for food and the number of salmon using the estuary as a nursery for their young has rebounded. 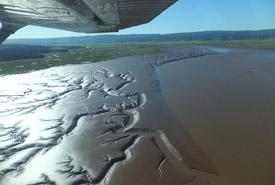 A vast bed of brown and seemingly lifeless mud may not appeal to many, unless you’re a shorebird. The mud and tidal flats found along sheltered areas near estuaries and bays abound with crustaceans, molluscs, fish and critters too small for the naked eye to see. These goopy grounds serve up the best buffet coveted by shorebirds, waterfowl and crabs. 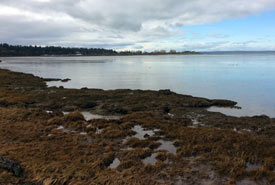 Mud Bay in Surrey, BC, was NCC’s first conservation project in the province. Established in 1974, it is located within an Important Bird Area. The mud flats there are rich with invertebrates and eel-grass beds, which are important for migratory shorebirds and waterfowl. NCC is continuing to work in coastal areas, including Tidal Flats, where the Bella Coola river nurtures the largest salmon-producing system on BC's central coast. With funding from the Government of Canada's Natural Heritage Conservation Program, many more areas such as Tidal Flats can be protected in some of the country’s most cherished landscapes. 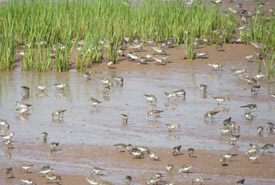 Every summer, NCC’s Johnson’s Mills Shorebird Reserve and Interpretive Centre in southern New Brunswick welcomes thousands of visitors to witness the spectacular sight of migratory shorebirds feeding on the mudflats of the Bay of Fundy. Hundreds of thousands of birds, including sandpipers, plovers and sanderlings, stop in the Bay of Fundy before they continue their journey to their southern wintering grounds. 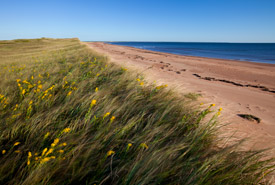 Sand dunes and beaches are among the most recognizable coastal habitats. These are shaped and formed by wind and waves. Although these habitats seem barren, there are sand-adapted plants that stabilize the dunes, such as American beach-grass and marram grass. Interestingly, the grasses growing on some of NCC’s properties, including the Conway Sandhills and Cascumpec Sandhills in PEI, were once used as livestock feed for homesteaders. 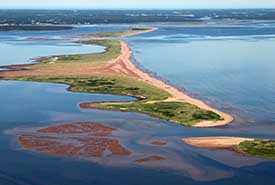 Oceanic islands provide important habitat for seabirds. Because of their isolation, they often have different plants and animals than the mainland. Newfoundland is where NCC’s easternmost properties occur. Here you can find the threatened Newfoundland population of the American marten. The Maddox Cove Nature Reserve is an important stopover site for migrating birds. Seabirds, such as gulls and murres, can be spotted on the reserve. Similarly, Miscou Island located off the northeastern tip of New Brunswick is an Important Bird Area and migratory corridor for birds and the last land stop before reaching their southern overwintering grounds.

While NCC’s work focuses on private land conservation, occasionally special opportunities arise to contribute to the protection of open marine areas. In 1997, NCC helped with the relinquishment of underwater oil and gas permits near Haida Gwaii, BC. This paved the way for the creation of Gwaii Haanas National Marine Conservation Area. 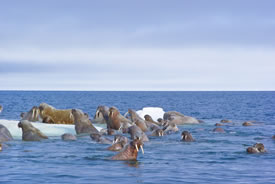 In Canada’s high Arctic, NCC has accelerated the protection of a National Marine Conservation Area in Tallurutiup Tariunga/Lancaster Sound, by securing and then extinguishing resource rights. Habitats in this region include polynas. These are home to many marine mammals, including harp and ringed seal, narwhal, beluga and bowhead whales, walrus and polar bear. The surrounding shores are important nesting habitat for seabird colonies. 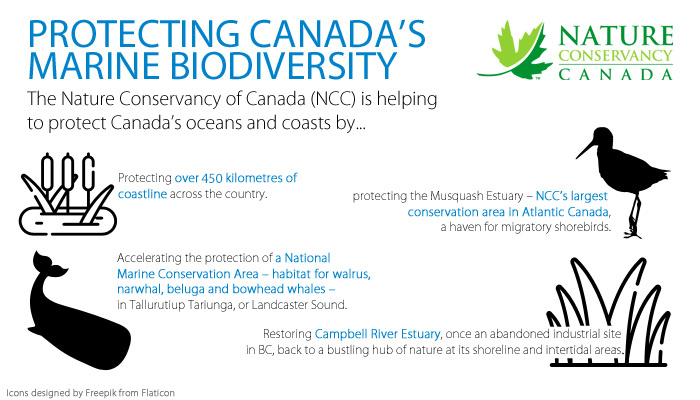