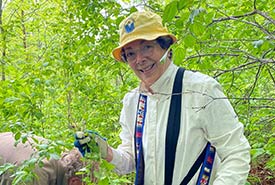 Cheryl Anderson at a garlic mustard pull volunteer event in Prince Edward County, ON (May 2022) (Photo by Amanda Tracey/NCC staff)

I’ve been working for the Nature Conservancy of Canada (NCC) in the eastern part of central Ontario for nearly five years. While my work spans a large geographic area, a lot of my time is spent on the wild south shore of Prince Edward County. Prince Edward County (referred to as “the county” in most of eastern and central Ontario) is technically an island, connected to the mainland only by bridges. Tourism is a significant part of the economy in the county, with Sandbanks Provincial Park being an especially popular destination. For me, working here has been a joy. The nature is rich, and the views are spectacular. But what I have enjoyed most are the people. I have never seen so many people dedicated to conservation in one small place before.

When I started working for NCC, there wasn’t really a regular face for NCC in the county. And I was welcomed by everyone with support and enthusiasm. One of the first people I met was Cheryl Anderson. I was new to working in the county, and Cheryl immediately connected me with a long list of locals, some running other nature-related programming in the area, some with biological proficiencies, and others who just wanted to help where they could. Cheryl has remained a big part of my work there, always building connections, wanting to poke around somewhere new, but most of all, facilitating bringing more people here to show them why it’s such a special place.

When you ask someone how they fell in love with nature, they often don’t know. Maybe it happened gradually over time, or perhaps it was something developed through school, or they just feel that it’s always been a part of them. I am one of those people. I don’t have a specific moment. However, Cheryl does, and she clearly remembers exactly when nature found her. 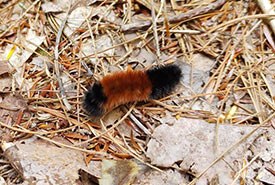 Her grandmother was a teacher and while they were on a walk, her grandmother handed her a woolly bear caterpillar. Cheryl was amazed at the soft creature in her hands as it delicately maneuvered itself about her palm, and from that moment on Cheryl has always been the happiest when she is outside. At that moment, nature became a part of who she was.

When I asked Cheryl what it is about Prince Edward County that she loved and why others should care about it, she replied: “The county is an interesting place. It has limestone alvars that meander throughout but also little pockets that are excellent for agriculture and not just traditional agriculture, but different kinds of agriculture too. Because of the county’s position at the eastern end of Lake Ontario, it sneaks down further into the lake and it’s a shorter distance across for migrating birds, bats, dragonflies and monarchs. It really is in a key spot, being right in the middle of the Atlantic and Mississippi flyways.”

When Cheryl relocated from Guelph, Ontario, to the county in 2003, the first thing she did was put up her bird feeders. To her surprise, one of her visitors was a fox sparrow. She wondered what on Earth a fox sparrow was doing here. So, she reached out to the local naturalists’ group to learn more about birds in her area and was connected to many like-minded individuals in the process. Cheryl has lived in the county for nearly 20 years and has dedicated thousands of hours to protecting the area’s cultural and natural heritage.

Through her work with the Prince Edward County Field Naturalists (PECFN), South Shore Joint Initiative (SSJI) and the Prince Edward Point Bird Observatory (PEPtBO), she has shared the wonders of Prince Edward County to countless individuals from near and far. She has hosted numerous strolls along the shore to look for ducks and migrating songbirds, or to learn about the natural and cultural history of the area. She’s assisted with the Great Canadian Bird-a-thon and Christmas Bird Counts. She helped to re-establish PEPtBO’s Spring Birding Festival and hosted the Wild Thing Biodiversity Day for kids. She has even assisted with the south shore Important Bird Area and its transition and expansion to a Key Biodiversity Area. And this is just scratching the surface; she has done it all.

Her proudest moment among all of this, of course after the successes of her children and grandchildren, was the successful community effort to appeal a massive wind turbine development on public and private land on the South Shore, as she and others had worked so hard to see that through. And it’s not just the countless events and nature walks, Cheryl’s involvement has been on both the forward-facing side of things and in the background too. She has been involved with all aspects of conservation — from grant applications and management, to fundraising, to strategic planning and being a donor herself. The hands-on work is always fun and challenging but being involved in the background is another challenge. 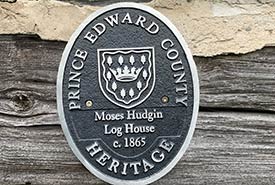 One thing that really stuck out to me about Cheryl’s involvement on the south shore of Prince Edward County was her desire to link natural heritage with cultural heritage. A great example of this has been Cheryl’s leadership with the stewardship and restoration of the Moses Hudgin Log House. This house is on a property that NCC protected in 2018, called the Hudgin-Rose Nature Reserve. While NCC’s focus was the natural values of the land, which included a diversity of habitats for many at-risk species, this house held great significance. This log farmhouse, built by Moses Hudgin in about 1865, has a heritage designation, and recognizing this, NCC passed on the oversight of the house itself to Cheryl and SSJI.

When I asked Cheryl about why tying the natural and cultural features of a place together was important, she noted that “the county has been and remains a rural community. The culture here revolves around the natural resources like forestry, fishing, etc. and because of this, it is so easy to see how important the natural world is to our culture. It’s a reminder for us that what sustains us is the biodiversity of not only the present, but also of the past.”

Volunteering has always been something that Cheryl has valued. She recalls in her later teenage years making a commitment to always being involved in her community, wherever that may be. And I think we can all agree that she certainly held up her end of that commitment! “What it really comes down to is getting people and especially young people involved,” says Cheryl. “And it’s so challenging to do, but the least we can do is be flexible and ensure there are opportunities there for them.” And Cheryl has done just that. She is one of my conservation heroes, and I am sure she is a conservation hero for many other people who she has crossed paths with too.

So, with the dawn of the new year, if you’re wondering how to get involved in conservation in your community, take Cheryl’s advice: “Look for events in your area and come on out! Check with your local naturalists’ group, seek out some of the “Friends of” groups in your area, ask your local conservation authority or land trust.” NCC runs a Conservation Volunteers program where you can get hands-on conservation experience in many natural areas across Canada. “If you’re a little scared or nervous, then grab a friend and bring them along with you,” recommends Cheryl.  The first step is always the hardest. 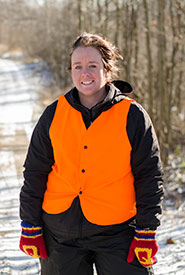