Could there be an invasive species in your backyard? 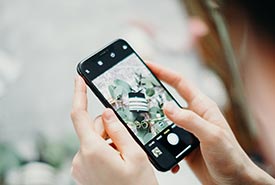 Person taking picture of a plant (Photo by iStock)

The changing of the seasons in Canada brings back some of our most beloved species. Migratory birds fly back north, our gardens come alive and buds reappear on the trees. However, the warming weather can also bring some less-than-desirable species, including invasive species.

While invasive species management varies across a landscape as large as Canada, one thing remains constant: the earlier you detect an invasive species, the better! Spring is an excellent time to survey your yards and local parks for potential invasive species. There’s no time like now to grab a cell phone or clipboard and a camera and get started!

One pesky insect to be on the lookout for in eastern and central Canada is the invasive hemlock woolly adelgid. This aphid-like insect sucks the fluid from plants and is a menace to eastern hemlock trees. Hemlocks are an important species for birds and mammals. The hemlock tree, commonly found in ravines and cool mixed woods, plays an important role in regulating stream temperatures. To date, this bug is found only in Nova Scotia and southern Ontario. 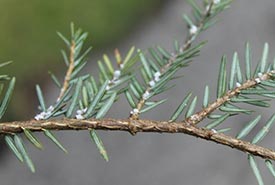 This tiny pest can hitch a ride on infested wood and nursery stock as well as birds and mammals. It makes its egg sacs, which look like tiny balls of wool, on the underside of hemlock branches in the spring. Look for these egg sacs and consider trying ball sampling (a fun family activity!) or sticky trap sampling to monitor the health of your hemlocks, especially if you live close to current populations. Finally, avoid placing your bird feeders too close to a hemlock tree in infected areas, as the insects can hitch a ride on the feathers of birds into new areas! 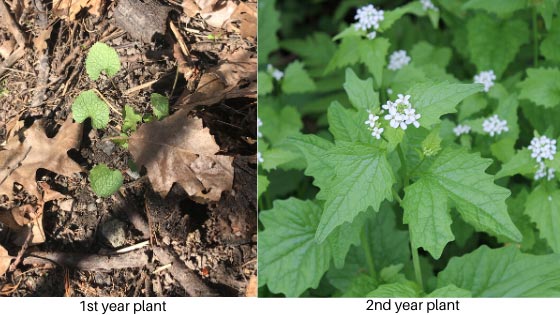 Another spring-time emerging plant has actually been hiding under the snow all winter. Garlic mustard is an invasive herb originally brought over to North America as an edible plant rich in vitamins. This plant has two life cycles: the first year, it lives as a rosette that overwinters and develops into a second-year seed-producing plant. If left unmanaged, this plant can quickly take over, outcompeting native species and ruining your landscaping plans. Not sure if it’s garlic mustard in your yard? Crush the leaves between your fingers — if it gives off a strong garlic smell, it’s garlic mustard! 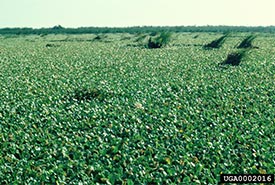 Accidentally buying invasive species is another way these species can show up in our backyards and woodlots. Popular pond plants have a high potential to become invasive if they escape your backyard. For example, water hyacinth, water lettuce, parrot feather and yellow floating heart can all put our Canadian biodiversity at risk. Accidental escape can happen by flooding into a nearby waterbody or through bird movement. Avoid contributing to the sale of invasive plants and always select native aquatic plants for your pond.

So, what should you do if you find an invasive species? Report it!

In Canada, there are a lot of ways to report invasive species. Documenting your sighting helps the invasive species community to understand species distribution and spread over time. Reporting is especially important if it is a high-priority species not known to be present in your area, like hemlock woolly adelgid.

In the meantime, follow these tips to make sure your backyard stays invasive species-free:

Lauren Bell is the education and community outreach coordinator at the Invasive Species Centre.