Dangers of artificial light at night to birds 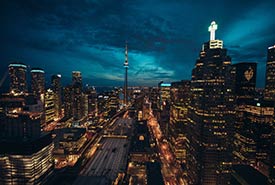 Since the discovery of fire, humankind has tried to push back the darkness of night, extending the total usable hours in a day. Light has been a beacon, warning ships of treacherous coastlines and guiding them to safe harbours. Symbolizing life and goodness, light has provided inspiration to poets and songwriters for centuries. For many, a cozy fire conjures thoughts of warmth and safety, a symbol of the comforts of home.

Over a relatively short time span, humans have refined how we create light with ultra-bright LEDs now commonplace. The glow of cities has changed the night sky. Human progress often happens at a pace greater than the natural world can adapt to, and the rapid development of light technology is no exception. All species evolved with dark nights, and their internal clocks (circadian rhythms) are tuned accordingly. Many species require particular amounts of light and darkness for the healthy functioning of their behavioural and physiological cycles. 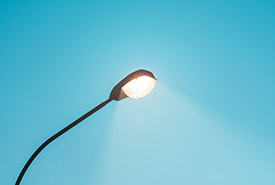 Problems arise when these natural cycles are disrupted and the species’ former adaptive behaviours no longer benefit it because the environment has changed (for example, nights are no longer suitably dark). In fact, artificial light at night (ALAN) that disrupts biological processes is considered a form of light pollution.

Birds exposed to ALAN may initiate reproductive activities, or molt (replacing old feathers) earlier than birds in dark night areas. Beginning reproductive activities sooner may provide an advantage by extending the breeding season. However, this benefit is potentially offset or even overshadowed if the typical breeding cycle coincides with other factors in the environment that increase the survival of either the chicks or adult birds (such as having chicks hatch during the caterpillar phase of the butterfly life cycle, so abundant food is present for them). 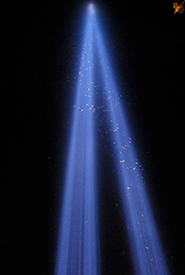 Many bird species migrate at night and are attracted to lit areas. As a result, ALAN emitted from building is a key factor in bird–building collisions. These collisions contribute to the deaths of millions of birds each year in North America, making an already perilous migration journey even more dangerous. Birds may also become “trapped” in the light, and, unwilling to fly outside of the lit area, they die of exhaustion. One example of this is the 9/11 tribute lights (two soaring light beams made of 88 search lights) in New York City, where researchers documented migrating birds trapped in the light beams. To mitigate the situation, the lights are switched off for 20 minutes to allow birds to disperse once the number of "trapped" birds reaches around 1,000.

Other things to help reduce light pollution (ALAN) include:

FLAP Canada volunteers monitor around the perimeters of glass buildings in cities where a volunteer base or nature society has implemented their programming. They look for birds that are victims of building collisions and take any surviving birds to wildlife rehab facilities. FLAP Canada also tracks bird-building collisions, so if a bird hits your window at home, you can report it on the FLAP website. They also provide resources to help you make your windows more bird friendly. See birdsafe.ca. 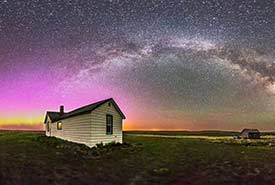 Night sky above Old Man on His Back Prairie and Heritage Conservation Area, SK (Photo by Alan Dyer)

Lastly, you can learn about Dark Sky and Nocturnal Preserves, which are natural areas where the dark night sky is protected. Many national and provincial parks are designated dark sky sites, as is the Nature Conservancy of Canada’s Old Man on his Back Prairie and Heritage Conservation Area — dark sky sites make for great stargazing spots!