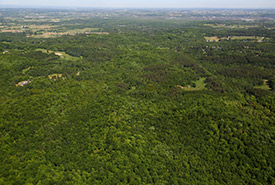 One day it rained red in Happy Valley Forest, and I was there to see it.

This was not the red rain of cast-off maple leaves in the fall. This rain painted the tree branches in the spring. And I have witnesses.

This is how it went down.

It was 2016 and I was spending a lot of time in the hills north of Toronto as a staffer with the Nature Conservancy of Canada (NCC), a private land conservation charity. Our team was immersed in a flurry of land acquisitions aimed at conserving the core of Happy Valley Forest. This 1,000-hectare woodland is one of the largest deciduous forests on the Oak Ridges Moraine and is home to many rare, endangered and sensitive species.

I was guiding a small family group along a hilltop trail deep in the forest. It was their late father’s bequest that helped pay for the property we were traversing. We were enroute to visit Dr. Henry Barnett (aka Barney), an avid birder and champion of conservation who had introduced the family to NCC’s work there. 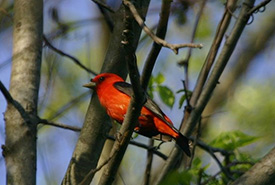 With spring bird migration underway, one of the family wondered if we might get lucky and see a scarlet tanager. These are bright red, slim-billed relatives of cardinals, aptly described as black-winged redbirds. They are known to thrive in these deep woods. Amazingly, I soon spotted one through a gap in the leaves. I was pointing it out when we saw another red form drop down nearby, and another. I put down my binoculars and gazed skyward to see dozens of this uncommon bird sprinkled throughout the forest canopy.

We were awe-struck. I had never seen anything like it before, nor have I since.

Later over tea, we shared our story with Barney. We could see the twinkle in his eye as we shared his excitement about this significant forest habitat, and the fact that this rare sighting played out on land now protected from development. 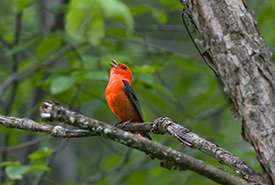 I think back on that magical moment as a microcosm of the people, events, and visions that together are helping conserve the Happy Valley Forest and other significant natural areas.

When it came time for Barney to move from his home in the forest, true to his commitment, he worked with NCC to conserve his property. The purchase of his land became one of 19 different transactions that NCC led or supported to help build a 324-hectare network of conservation land in the Happy Valley Forest (That is as of 2022, hopefully there is more to come!).

The Creed and Love families made generous land donations. The Taskers and Barnetts donated conservation easements, which involve permanently giving up development rights to properties. Most land deals were outright purchases, with many involving ”conservation severances.” This special legal tool lets landowners convey portions of properties for conservation in the policy-protected Oak Ridges Moraine, where normally no subdivision of land was allowed.

As it turns out, the first landowner to offer property to NCC was an early advocate of Oak Ridges Moraine protection, the late Dorothy Izzard. A retired teacher, Dorothy was a driving force behind STORM (Save the Oak Ridges Moraine), a group active to this day. Over tea in her forest home, I recall Dorothy saying how pleased she was with the expansion of conservation land since her original land donation back in 2001.

NCC’s conservation land is linked to other protected lands in the forest. NCC helped Toronto and Region Conservation Authority purchase Humber Source Woods to the south and Oak Ridges Moraine Land Trust worked with York Region to purchase their Happy Valley Forest Tract to the north. (NCC also supported that acquisition through administering grants of federal funding). King Township’s Council itself passed a motion in 2008 that commits the municipality to protecting its land in the forest and maintaining it in a natural state for long-term public enjoyment.

Today, the trail where the tanagers rained down is part of a much-loved walking trail network through the Happy Valley Forest Nature Reserve. The trail crosses a patchwork quilt of conservation land, pieced together over almost two decades. Each step had a different story, and each step was costly. On a per-hectare basis, the properties were among the most expensive NCC had ever purchased. But with willing landowners, the generous support of private donors and government grants, and a slew of dedicated NCC staff, the community came together to permanently protect the heart of the forest.

This legacy will outlive all of us.

Each landowner, donor, partner, and volunteer champion has had different motivations to be involved in the ongoing effort to protect Happy Valley Forest. But all share a common love for the forest, whether for its beauty, its breathing space, or its bright red birds.

Mark Stabb is the Central Ontario-East program director for the Nature Conservancy of Canada and was the NCC lead on the Happy Valley Forest conservation project from 2006 to 2017.