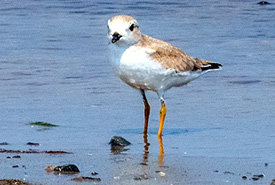 On a humid July morning, I had the pleasure of joining Birds Canada's piping plover coordinator in Escuminac, New Brunswick, to track piping plovers and visit a known nesting area that the Nature Conservancy of Canada has protected.

Piping plovers are a federally endangered shorebird which exist in North America only and approximately one-fifth (just over 1,500 individuals) of the population breeds in Canada. The Canadian populations are concentrated in three zones: Atlantic Canada, the Prairies and Ontario's Great Lakes.

In Atlantic Canada, piping plovers frequent the coastal zones of all four provinces: New Brunswick, Nova Scotia, Prince Edward Island and Newfoundland. Within New Brunswick, there are 116 nesting piping plovers with 36 per cent of the southeastern population located on Escuminac Point’s beaches.

Our mission was to track four known piping plover families at a remote location with undisturbed habitat ideal for the plovers' survival. We even saw curious young chicks that were around one month old and beginning to take flight.

Want to be transported back to the summer field day by the ocean and learn more about piping plover research? Check out this StoryMap with stunning photos >

Posted in: Birds, Species at Risk 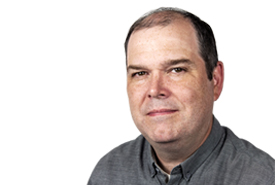 Andrew Herygers is the communications manager for Nature Conservancy of Canada's Atlantic Region.