Find the Birds – How a mobile game can aid conservation 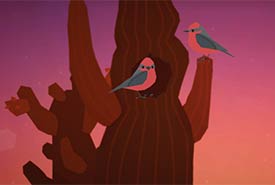 Vermillion flycatchers in the game (Graphic courtesy of Adam Dhalla)

It is not a stretch to say that our planet is in dire need of more conservationists, and environmentally minded people in general. Birds and birdwatching are gateways to introducing conservation and science to a new generation.

Growing up in beautiful British Columbia, I have loved nature since I was a toddler. I did not initially understand the science behind what I was seeing. All I knew was that I cherished it, and mainly birds. That passion turned into curiosity and, upon learning of the current widespread threats to birds and habitats, grew into concern.

Unfortunately, it seems as though younger generations are often unaware of the amazing world in their backyard. They don’t hear the birdsong emanating from the trees during the morning chorus. This is disastrous for wildlife and habitat conservation because if people do not appreciate and understand their natural surroundings, they will not take care of them. We need a drastic change in the way we view our environment as a society, and we are currently overlooking the opportunity to connect with the next generation of potential conservationists.

This problem inspired my dad and me to come up with the original concept for Find the Birds, a free educational mobile game about birds and conservation. I was 10 at the time, and I discovered that I was usually the only kid out birdwatching. So we thought, why not bring the birds to them via the digital technology they are already immersed in? 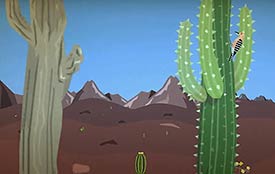 Woodpecker standing on a cactus (Graphic courtesy of Adam Dhalla)

Find the Birds reflects on the birding and conservation experience. Players travel the globe as an animated character on their smartphone or tablet and explore real-life, picturesque environments, finding different bird species. The unique element of this game is its attention to detail; everything in the game is based on science. The species in Find the Birds are illustrated realistically and animated. Games do not always need fabrication and fantasy. Real birds and their actual habitats are beautiful and fascinating enough.

Players also complete virtual conservation quests to improve the health of the birds’ habitats, like setting up nest boxes or replacing invasive species with native, bird-friendly ones. They can take photos of the birds they see and collect them in an album. Perhaps most importantly, players collect information cards — one for each new species. These cards contain the exact photos, videos and sounds of each species, generously provided by the Cornell Lab of Ornithology, the world’s leading avian research institute. Check out the animated screen capture below of a player exploring Arizona, taken from a test version of the game.

The first in-game location is Arizona, which should be available to download and play for free on Apple and Android phones and tablets from the Apple App and Google Play Stores in April 2021. After that, the next in-game location will be my home province of British Columbia! All in-game locations will feature life-like illustrations of the actual birds (including the Vermilion flycatcher found in Arizona pictured in the top image), plants and other aspects of the species’ habitats, something that does not currently exist in any other game.

I cannot imagine a world without birds. With this project, I hope to make everyone feel the same as I do and want to protect them before it is too late and we lose these wonderful creatures. To learn more about the game, please visit findthebirds.com. 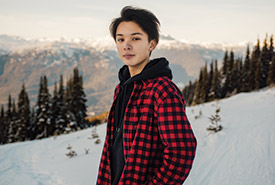 Adam Dhalla is a naturalist and wildlife photographer. He co-created the concept for the mobile game Find the Birds.