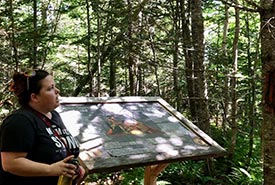 On Wednesday, June 22, the day after National Indigenous Peoples Day, a team of interpreters from the Nature Conservancy of Canada’s (NCC’s) Johnson’s Mills Shorebird and Interpretive Centre headed to the Fort Folly First Nation for a Medicine Trail walk. Guided by Mi’Kmaq cultural coordinator Nicole Porter, also known as Grandmother Buffalo, we set out to hike the gorgeous nature trails that Fort Folly had to offer on this warm and sunny morning.

We started by offering our host tobacco ties, in exchange for the knowledge that she would share with us during the walk. Along the way, we stopped at information signs that were put up for anyone wishing to take part in a self-guided tour of the trails. Grandmother Buffalo explained to us that Indigenous Peoples are from Turtle Island, or as we call it, the American continent. The Mi’kmaq have always stewarded and lived on these lands.

Grandmother Buffalo explained to us the concept of Two-Eyed Seeing: the traditional Mi’kmaq idea of better understanding events through different perspectives. To help us grasp this unfamiliar concept, she used the example of the stories told from the end of the ice age. We can use Two-Eyed Seeing when adding the Mi’kmaq view of the event through their stories, to what we now know of the timeline of the last ice age, thanks to advancements in the field of geology. Two-Eyed Seeing means that you can acquire a more balanced perspective when using both the strengths of the Western eye and the Indigenous eye together. 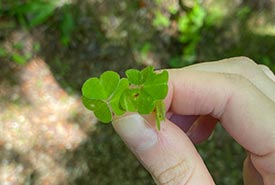 Further along the trail, Grandmother Buffalo directed our attention toward a plant growing along the trail. She explained to us that what she called lemon hearts were more widely known as wood sorrel, and that they are quite the tasty treat! Grandmother Buffalo proceeded to offer one of the tobacco ties to the Earth, in exchange for the wood sorrel that she would take. After saying a few words, she invited us to pick a few of the small plants to eat. Wood sorrel looks like clover, which is what I first mistook it for, but has three heart-shaped leaves. After chewing on the leaves for a few seconds, I was completely surprised by the burst of sour. It tasted like lemons! Grandmother Buffalo told us that it is quite common for people to pick lemon hearts and put them in their water, similar to how people garnish their drinks with lemon, for extra freshness. 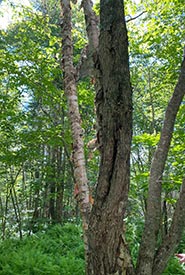 Later in the walk, Grandmother Buffalo stopped to observe a very uncommon sight. Two trees, one maple and one birch, had grown entwined in a double-helix shape. Both trees had relied on each other’s support to grow and reach sunlight together. She explained how this could serve as an analogy to the future of relationships between Indigenous people and NCC. As protectors and caretakers of this very land for millennia, nobody knows how to move forward in the conservation of nature more than Indigenous people do.

With an open mind, I came to participate in the Medicine Trail walk not really knowing what to expect. I will carry with me the knowledge that Grandmother Buffalo shared with us, and I know that the Johnson’s Mills team will try its best to incorporate this new perspective into our work with NCC. I strongly encourage anyone wishing to learn more about the history of Indigenous Peoples in Canada to look for guided or interactive tours in their area.

Cairo LeBlanc is a Conservation Intern with the Nature Conservancy of Canada in the summer of 2022.