I count myself fortunate when the change of seasons doesn’t bring about a runny nose, itchy eyes, headache and coughing, among other symptoms brought about by pollen (a fine powder produced by plants for sexual reproduction). Some pollen is at its highest concentration in spring, released by many species of trees, including maple, oak, poplar and pine. Then there’s a fall allergy season where some wildflower pollen dominates.

No doubt that this can be an inconvenient and sometimes frustrating part of life for those who are sensitive to these particles. But contrary to common misconception, goldenrod is not responsible for the majority of allergies — ragweed is! According to a 2011 research study, ragweed season in the U.S. and Canada is getting longer. As we head into the height of ragweed season (August to October), I hope to share a few major distinctions between the two to help set the record straight and hopefully curb any cases of mistaken identity during your weeding efforts. 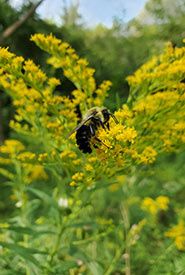 There are 32 native species of goldenrod in Canada, six of which occur in every province. There are some at-risk species, including Riddell's goldenrod, which the Nature Conservancy of Canada protects habitat for at the Manitoba Tall Grass Prairie Preserve and some locations in southern Ontario. This family of plant is pollinated by bees, wasps, beetles, butterflies and flies.

One of the most common species of goldenrod found across Canada is Canada goldenrod. It blooms from July to November. The plant can reach 152 centimetres tall and sports showy yellow flower clusters. The leaves grow in alternate form on the stem, are lance shaped and sharply toothed on the edges. It is hairless on the upper side and hairy on the underside. 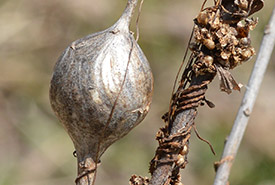 You can sometimes find stems with a gall (ball-like growths on the stalk), as moths or gall flies lay their eggs on the plant and the larvae occupies the stem.

Goldenrod pollen is much too heavy to be carried by the wind, so it relies on animal pollinators, such as bees and butterflies. This is why it has such showy flowers — to attract pollinators. Goldenrod nectar also attracts some bird species. Different goldenrod species occur in almost every type of habitat, ranging from forests, to prairies, and even alpine areas.

Many gardeners are even choosing to incorporate goldenrod in their yards to support biodiversity. Here is a list of goldenrod species that don’t spread aggressively for Ontario gardens. 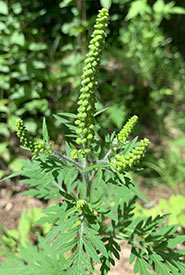 Three ragweed species occur across much of the country (common ragweed, giant ragweed and western ragweed). Their pollen is dispersed by the wind and is a common allergen from August to October.

Ragweed has small, inconspicuous flowers because it relies on wind, and not pollinators, to transport its pollen. Ragweed tends to thrive in disturbed soil, making it a common appearance in cultivated land and city dwellers’ yards. 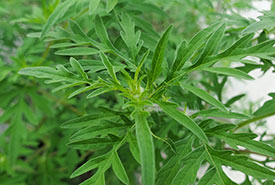 In some municipalities, there are bylaws that require landowners to remove ragweed during certain times of the year to protect public health. 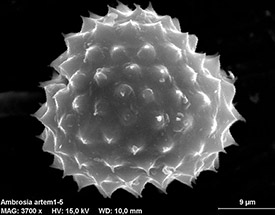 Common ragweed occurs in every province in Canada. An annual herb with an erect stem, common ragweed has finely divided, opposite leaves at its base and alternate leaves near the top. It can grow to 150 centimetres tall. Young plants are yellow-green and mature plants are gray-green with clusters of tiny greenish flowers along a stalk at the upper part of the plant. Its pollen can travel 200 kilometres by wind! Although a problematic plant for allergy sufferers, common ragweed has seeds that are food for songbirds and some upland game birds. 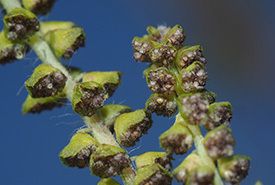 Now that you know what the key differences between goldenrod and ragweed are, you can admire those beautiful yellow, plumy flowers on the roadside or empty lots knowing full well they aren’t responsible for allergies.