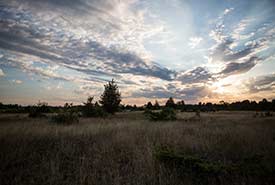 Carbon is the backbone of life on Earth. Carbon makes up everything we do, everything we eat, and it even makes us up. Carbon is stored in different reservoirs, which broadly include land, water and the atmosphere. Carbon cycles from one reservoir to another. When you remove carbon from one reservoir, it must find its way to another reservoir. For example, the burning of fossil fuels on land results in more carbon moving from land into the atmosphere. Sometimes this cycling of carbon can have other impacts when it flows between reservoirs. For instance, rising atmospheric temperatures can be linked to increased carbon in the atmosphere reservoir.

Carbon sinks are any natural reservoir that stores more carbon than it produces. Plants are one of the key sinks (storage units) for carbon on Earth. Plants take in carbon dioxide from the atmosphere and then use that carbon dioxide and energy from the sun to create sugars. Plants use these sugars themselves, or other organisms can consume them later by eating the plants.

The changing role of trees in carbon storage

If I asked you to think of an important group of plants that stores carbon on the Earth, you might likely say “trees, of course.” And you wouldn’t be wrong! Trees have been the champions of carbon storage for a long time. Forests have served as successful carbon sinks for storing the carbon dioxide emissions that humans and our activities produce. However, as temperatures continue to rise, drought ensues and efforts to mitigate climate change continue, the role of trees in carbon storage isn’t quite as cut and dry anymore. 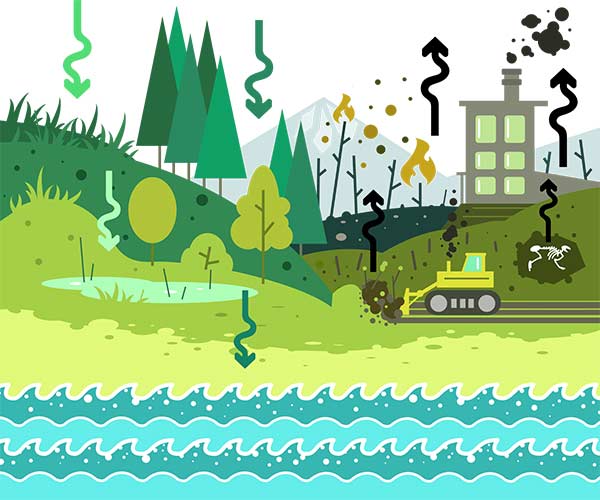 The carbon storage cycle: carbon in the atmosphere is incorporated into plants through photosynthesis, and is returned to the atmosphere through respiration, decomposition and the burning of fossils fuels. Waldron grasslands, Alberta. Next Creek in Darkwoods, BC. (Illustration by Cory Proulx)

I mentioned before that more carbon in the atmosphere means higher temperatures, right? Well those higher temperatures, combined with drought, are big factors in producing more large-scale wildfires. When these wildfires rip through landscapes, torching trees, these trees quickly become carbon producers instead of carbon sinks and release their stored carbon back into the atmosphere.

This is where the unsuspecting warriors against climate change come in: grasslands. Grasslands are made up of mainly non-woody species, like grasses and wildflowers. Vegetation in grasslands is much shorter than in forests (usually not much taller than the average person) and the biomass you see above ground compared to a forest is substantially reduced. The classic grassland you might picture would be the vast Great Plains that sweep from Alberta just into Manitoba, and throughout parts of the United States. The Great Plains are a great example of a type of grassland called prairie, and prairies are incredibly diverse, productive habitats characterized by a wonderful mix of native wildflower and grass species.

So how can grasslands compete with forests as carbon sinks? Many prairie and grassland plants are perennials (they grow back every year) that are well-adapted to dry conditions and have extensive root systems that can travel metres below the ground. These roots end up being excellent storage for carbon. In fact, it is suggested that the soil underneath prairie plants can house up to 1,700 kilograms of carbon per acre per year. If a grassland catches fire, the above-ground biomass burns, but the below-ground biomass remains largely untouched. This means that even after fire, grasslands remain carbon sinks. Grasslands are also much quicker to regenerate after fire, whereas trees need decades to grow.

Of course, this doesn’t mean we replace all forests with grasslands. Forests are critical habitats for many species and provide a wide variety of ecosystem services. Instead, this should highlight the importance of grassland creation, where appropriate, or the enhancement or stewardship of existing grassland habitats.

While prairie and grasslands in Canada are most often associated with the Prairie provinces, in Ontario we have a significant amount of prairie (and many historical and remnant prairie patches), ranging from southwestern Ontario to the beautiful Rice Lake Plains and even into the more easterly parts of the province.

Storing carbon from the atmosphere

I have been involved with a large-scale restoration project to convert 16 hectares (39 acres) of field into native grassland in the Nature Conservancy of Canada’s (NCC’s) Eastern Lake Ontario Coast Natural Area. While the main goal of this project was to provide habitat for declining grassland birds like bobolink or eastern meadowlark, these new grassland patches will also store large amounts of carbon from the atmosphere. As well, in NCC’s Rice Lake Plains Natural Area, staff have restored and/or enhanced nearly 550 hectares (1,359 acres) of native tallgrass prairie on NCC and partner land. The natural area provides excellent habitat for pollinators, while storing vast amounts of carbon underground.

Turning a field full of non-native species into a beautiful grassland is work that has highly visible outcomes. People notice the plants look different. They notice the increase in butterflies and bees feasting on their nectar. They can see the grassland birds returning to the site to nest and raise young. These highly visible outcomes get noticed and get people excited. But these grasslands are also now huge carbon sinks, and this is largely an invisible outcome — a part of our work that often goes unnoticed. And that’s okay, because sometimes it’s those invisible outcomes made possible by resilient and unsuspecting warriors (like grasslands) that could have the some of the most significant impacts on the natural world around us.