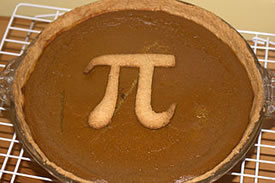 March 14: it has many of us sharing photos of pies, Π and pies with Π on them.

But our fascination with the number 3.14 goes beyond a good excuse to eat baked goods. The mystery and wonder of pi is evident everywhere around us, including in nature,  which is perhaps why some of us get so excited about it.

Pi is everywhere in nature, if you know where to look for it. According to this article by Live Science, pi is evident in the shapes and currents of rivers: 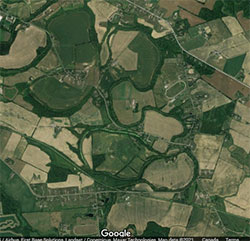 Oxbows on Fairchild Creek near Brantford, Ontario (Map by Google)

“A river's windiness is determined by its ‘meandering ratio,’ or the ratio of the river's actual length to the distance from its source to its mouth as the crow flies. Rivers that flow straight from source to mouth have small meandering ratios, while ones that lollygag along the way have high ones. Turns out, the average meandering ratio of rivers approaches — you guessed it — pi.”

It goes on to add:

“Albert Einstein…used fluid dynamics and chaos theory to show that rivers tend to bend into loops. The slightest curve in a river will generate faster currents on the outer side of the curve, which will cause erosion and a sharper bend. This process will gradually tighten the loop, until chaos causes the river to suddenly double back on itself, at which point it will begin forming a loop in the other direction.”

Pi is encoded into patterns of life too, such as in the formation of pigmented areas and markings on fur coats. Pi is the constant in the spacing between the stripes of zebras, or the spots on a leopard, as this article notes.

Check out this slideshow by National Geographic, which includes the rings of Saturn, the stem of a plant, brown-eyed Susans and ripples in water.

The next time you paddle along a meandering river, wander through a field of wildflowers or spot a rainbow after a storm, take a moment to marvel in the wonders of our natural world. And then enjoy a slice of pie.

Check out these activities to celebrate Pi Day in nature: