Hiking the big one 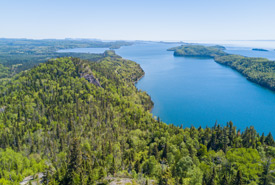 My dental training and career as a research scientist have allowed me to live, work, hike, bike and paddle in fascinating ecosystems around the world, including Asia, New Guinea, Europe, Africa and the Americas.

After retirement, I was fortunate to become chair of the Path of the Paddle, a 1,200-kilometre water and land trail traversing northwest Ontario. This role allowed me to witness this vast area’s wealth of natural beauty. Because I’m not a wordsmith, I rapidly run out of adequate adjectives to describe this world-class and emotive place: Big Trout Bay.

Along the Big Trout Bay woodland hiking trail are eight separate, marvelous lookouts with varying close- and long-range panoramas of bays and islands off the startlingly beautiful coast of the gem that is Lake Superior. Lake Superior’s sheer rock cliffs, which abruptly emerge from the depth of its clear, emerald waters, are like giant art pieces decorated with fascinating tenacious plants. 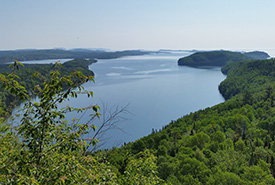 From the viewpoints along the trail and from the water, a moving parade of falcons, bald eagles, golden eagles, ospreys, various hawk species, vultures and ravens sweep past patient explorers who attempt to discover and grasp the enormity of the moment.

Keen observers can also marvel at the windblown patterns on the lake and its bays’ surfaces, which reveal the power and beauty of Lake Superior in its ever-varying moods; some dangerous, others sublime. Descending from the steep mesa ridges (extended, flat-topped hills with very steep sides), hikers encounter wetlands that are being restored to enhance biodiversity and the richness of the experience.

As an older person (or more appropriately, a geezer), my perspective of time allows me to witness the chewing up and spitting out of ceaselessly decreasing wilderness. I must emphasize a recent editorial in Science Magazine, which strongly argues for the critical need to preserve natural habitats, especially species-rich areas like Big Trout Bay.

Thanks to the Nature Conservancy of Canada and its donors and volunteers, Big Trout Bay will be protected for the long term. These heroes help protect such natural areas from expanding human pressures and show the commitment to maintain and honour this small treasure for generations to come.