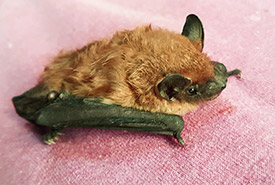 Previously, I discussed how small songbirds, and black-capped chickadees in particular, survive winter on the Canadian Prairies. Now I will discuss another strategy that animals use to survive the long, cold winter months: hibernation. Hibernation is more than just a really long nap, and it involves changes to the animal’s metabolism that lower its body temperature and slow its heart rate and breathing. Also, hibernating animals do not sleep through the whole winter and instead may wake up periodically to drink or urinate.

So why do animals hibernate? The main reason is that they don’t migrate and they need to survive the winter. Hibernation is a way to make it through the times of the year when food is unavailable or weather conditions require extra energy expenditures. Although many ectotherms (animals whose body temperature is regulated by their environment) go dormant during the winter, hibernation is typically observed in mammals (endotherms that actively regulate their body temperatures internally), including bats, bears and rodents.

All species of bats found in Canada are insectivorous, meaning they eat only insects. As insects are unavailable during the winter months on the Canadian Prairies, bats either need to migrate to warmer regions or hibernate.

The big brown bat is a medium-sized bat that typically weighs about 12–15 grams (about the same as a compact disc). Big brown bats are the most common bat encountered in prairie towns and cities. This species has adapted well to living alongside humans and frequently uses buildings for summer roosting as well as hibernation.

For optimal hibernation, bats require a site with a stable temperature between 2 C and 5 C that does not dip below 0 C. Before the abundance of insulated buildings on the landscape (i.e., prior to European settlement) bats used rock crevices or natural caves for hibernation. The necessity of having stable temperatures that remain above freezing is also why you won’t find bats using your bat box to hibernate, as these are not insulated to buffer against extreme temperature changes. However, bat boxes provide great summer roosting sites and a safe place for females to leave their babies when they go foraging. In addition to temperature, buildings as hibernation sites provides safety from predation, as most of the places that bats can fit into on buildings are inaccessible to most predators. 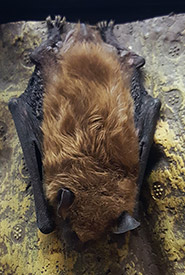 A big brown bat in torpor. Torpor is like a daily, smaller-scale version of hibernation. (Photo by NCC)

What does hibernation for bats actually involve? First, the bat needs to accumulate enough fat reserves to last the entire winter, as stored fat is their only energy source during hibernation. Many bats don’t make it through their first winter because they were unable to store enough fat.

Once the bat finds a cozy nook and settles in, its body temperature drops and its metabolic rate, breathing and heart rate all decrease, which allows them to use almost no energy and wait out the cold winter months. Going dormant for large portions of their lives may also contribute to longevity — big brown bats can live for around 20 years in the wild. The oldest recorded little brown bat, however, was 39!

A devastating disease for bats

White-nose syndrome is a fungus that infects the exposed skin of the muzzle and wings of hibernating bats and has caused the deaths of millions of bats in North America over the last decade. The white-nose fungus triggers an immune response in the bat’s body that causes it to use more energy during hibernation than healthy bats. The fungus also results in infected bats waking up more frequently than healthy bats. As a result, bats infected with white-nose fungus expend more energy than they can afford during hibernation, often resulting in their death.

In the Prairies, white nose fungus fortunately has not advanced that far west and for the time being the bats there are safe from the disease. Hopefully, the semi-arid climate and extreme cold winters will prevent the fungus from fully expanding into the area.

Sometimes on warm winter days, bats may wake up and fly around looking for water. If you find a bat outside on a winter day (e.g., on the side of a building), call your local humane society or wildlife rescue to come and collect the bat — this small action will most likely save the bat’s life.