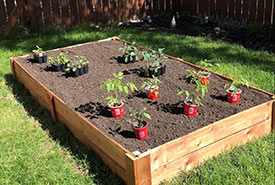 It’s amazing how slowing down and staying put in a place helps you connect with the life around you. I used to have quite a busy travel schedule, moving back and forth across the country several times a year to visit family or for work trips. But like so many of us, the pandemic forced me to stay put. Being home had its silver linings: in addition to helping me and my husband get to know our town storm pond, it has also meant more time in the garden. And with that, it’s made the garden and our home really ours.

Transforming a sand pit to a raised bed

For years, my ambition was to turn a small sand pit at the end of our garden, formerly part of a play area, into a vegetable patch. Last spring, I found a sheep farmer on Facebook who was making and selling veggie garden beds. I decided it was time to commit to expanding the sand pit into a raised bed. 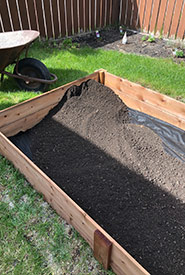 We ordered the bed, then three cubic yards (2.3 cubic metres) of soil. And then the soil arrived, pouring out from the back of the truck and waterfalling onto the driveway.

Out came the shovel, and the wheelbarrow borrowed from our neighbour, and we began to move the soil into the bed. We realized that we had ordered FAR more soil than we’d needed, but we found space for it all. The veggie bed was built, and we were set to become urban farmers. 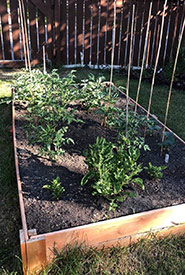 I’d tried starting veggies from seed in Calgary before, only to be heartbroken when hail or snow arrived in early September and destroyed my tomatoes before they could even ripen. Since then, I opted to buy my seedlings from the local garden centre. In our garage, waiting for the arrival of our raised bed, were a half-dozen tomato plants, four cucumber plants and another half-dozen kale plants. I planted them approximating a square-foot garden, using some companion planting concepts, and then seeded some arugula and spinach in between the tomatoes. Perhaps a bit too crowded, as I’d soon find out.

Along with the veggie bed, we also installed a rain barrel (a system that captures and stores rainwater).

Learn more about the Nature Conservancy of Canada's Small Acts of Conservation, like installing a rain barrel, and other ways to protect your watershed here >

The thing about being home all summer was that I was fully present to tend to the modest veggies and the rest of the garden. Logging out from work each evening, it was a short walk down the steps of our deck to the rain barrel, where I would fill the watering can. I would wander through the garden, pruning off the long leaves at the base of the tomatoes, weeding the soil and fending off pests. 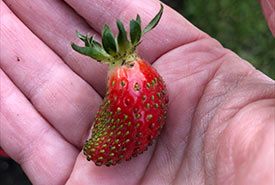 As the plants matured, I soon had enough arugula to make a small salad for lunch, complete with strawberries from my own plant and a small cucumber, topped off with store-bought feta cheese, mock chicken strips and balsamic vinegar. Truly field to table! The satisfaction of having tended to our own plants without chemicals, then walking back into the kitchen with a bowl full of greens was immeasurable.

There was, of course, the timeless struggle of battling the cabbage moths and the ants. But what I also found was that there are communities of gardeners online who are more than willing to share their knowledge. I learned that cinnamon sticks buried in the soil work well as an ant repellant. And soapy water tends to dispel the dratted cabbage moths.

One online gardener shared that the trick to encouraging the greatest harvest of tomatoes is to jiggle the flower’s stem between two fingers, to encourage the pollen to fall. Thanks to this jiggling technique, I now had a regular harvest of fresh and juicy tomatoes, bursting with flavour.

Plants also have personalities, as I’ve come to learn from my fellow online gardeners. Basil, for instance, is temperamental. It doesn’t like things too shady or too light, too dry or too wet. The trick, one gardener shared, is to cover the plant with a plastic bag, to make a tiny greenhouse. 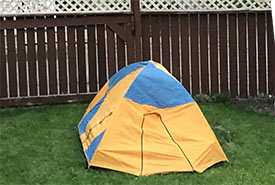 Gardeners are extremely reliable weather monitors. As soon as hail was about to hit in Calgary, someone would post on Facebook about what creative manner they were using to cover their plants — from umbrellas, to mesh, to hoop tunnels and more. I preferred my tent fly as a hail cover. 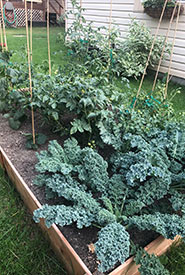 Summer in Calgary is short, and all too soon the frost warnings arrived. I placed my tent tarp above the bed for a few evenings, but then was forced to harvest green tomatoes, which can be used for chutney. As for the kale, although it’s a cold-loving plant, if left too late in the season without covering it, it can become bitter and stinky. Another lesson learned.

It’s a hard transition to go from being outdoors in the garden all summer, to fall and sitting inside by the fire. Through the gardening groups, I could feel the collective itch to get back at it again. By January, gardeners were posting about seed vendors and planning out their gardens. By February and March, many of them were starting their seeds inside under grow lights. A few of us also tried winter sowing a few seeds in milk jugs.

Come spring, the itch became unbearable, with gardeners asking how soon was too soon to plant. Wiser and more seasoned gardeners urged us to wait until after the first frost, which in Calgary tends to be the May 24 long weekend. 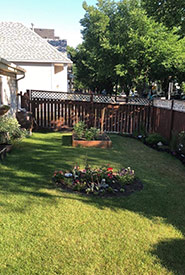 Making our garden welcoming to wildlife

It’s now the end of our second urban gardening season, and the kale and tomatoes have thrived in this summer’s heat. In fact, we have more of both that we know what to do with, despite offering both to neighbours and friends. This year, we’ve added water dishes with small stones in them to offer bees, ants and wasps a place to drink on hot days. We’ve watched robin families hop around the garden, sunning themselves in our flower beds and a family of sparrows fledge in our bird house. They seemed to like exploring in between kale plants or snacking on our romaine lettuce. And, we watch the Facebook groups closely for any sign of hail or snow, our tent fly at the ready.

Ours is a modest garden, but it’s filled with love and care. As we wrap up the second year of our urban veggie patch, I’ve learned even more lessons from the garden, the soil, the plants and other fellow gardeners. Who knows, maybe one year we’ll buy a quarter-acre outside the city, build a few veggie beds and have some goats to mow the lawn. And at the end of the lawn will be a patio with two chairs, where we can sit outside and soak in the satisfaction of having a place that’s truly ours.