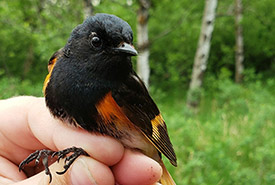 After many years working in the field of ecology and conservation, it can become easy to take for granted the unique and spectacular things you get to do and the beautiful landscapes you get to see on a regular basis. Being aware of this, I always try to appreciate the opportunities I have and to enjoy my time out in nature. One of the projects I am most proud to be a part of is the Big Valley MAPS station.

The Monitoring Avian Productivity and Survivorship (MAPS) program uses bird-banding techniques to capture birds during the breeding season and collects information on bird survival and reproductive rates to help explain which life stages are the key drivers of population changes.

In Saskatchewan, the Nature Conservancy of Canada (NCC) supports a MAPS station at the Big Valley property through a combination of project-specific funding and private donations.

If you would like to learn what a day of data collection at a MAPS station looks like, check out this story for more details. 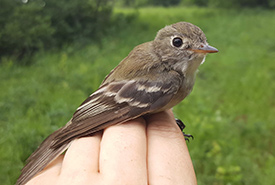 Since the first season in 2018, the Big Valley MAPS station has captured 657 birds (481 newly banded, 159 recaptured and 17 unbanded) of 32 different species; four of these birds were originally banded at other MAPS stations! It is always exciting to capture birds from other stations because recapturing banded birds provides a wealth of information to researchers and is one of the main goals for bird-banding projects. Recapturing birds also shows how birds disperse on the landscape. For example, in 2019 a male yellow-bellied sapsucker was captured at Big Valley MAPS that was originally banded in 2018 as a hatch year bird at a MAPS station approximately four kilometres away from the Big Valley MAPS station. This suggests that this bird came back to the general area where he was born, but not the exact spot, likely to avoid competing with his parents (birds often return to breed in locations where they were previously successful).

Recapturing birds can give us estimates of bird species' lifespans 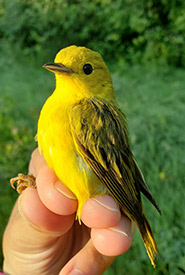 Another important thing we can learn from recapturing banded birds is how long they live. In 2020, we recaptured a yellow warbler that was originally banded in 2018 as an after second year (ASY) bird, which means that this bird was at least four years old when it was recaptured. And in 2021, we recaptured an adult male American redstart that was originally banded in 2018 as an ASY bird, which means that he was at least five years old when he was recaptured. Most of the estimates that scientists have for the lifespans of different bird species come from recapturing banded birds.

The five most commonly captured species at Big Valley MAPS are yellow warbler, house wren, least flycatcher, American redstart and black-capped chickadee. This suggests that the Big Valley site has large amounts of these species’ preferred nesting habitat. House wren and yellow warbler are also the most frequently recaptured species, comprising 46 per cent of all recaptured birds. There are several species that have only been captured once in four years, including eastern kingbird, Cooper’s hawk, white-breasted nuthatch and common yellowthroat. 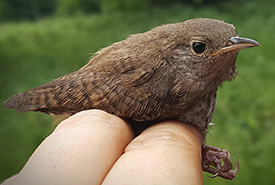 All but four (that is, 88 per cent) of the species captured at Big Valley MAPS are migratory, which means they fly south for the winter and then come back to more northern latitudes for the breeding season.

Recapturing birds banded at Big Valley MAPS in previous years suggests that the site has good quality habitat that is worth coming back to. For the four most commonly caught species (yellow warbler, house wren, least flycatcher and American redstart), there are usually more ASY birds captured than yearlings. Older birds are dominant in the social hierarchy and are able to claim the best territories, forcing subordinate yearling birds to less optimal areas. The high proportion of older birds captured at Big Valley MAPS suggests that this site contains high-quality breeding habitat for multiple species. 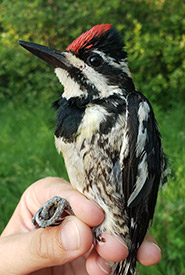 The data provided by the Big Valley MAPS station demonstrates how much valuable and varied information we can learn through long-term standardized monitoring programs. The MAPS program is continent wide, with stations distributed all across Canada and the United States. Data collected at individual MAPS stations are pooled, allowing scientists to answer population and range-level questions about different species. So, not only are we gathering important information on the local birds and the habitats they’re using that will be used to inform management of the Big Valley site, but we are contributing to the broader conservation of all the species we capture.

Learn more about other NCC projects across the country here >