Keep your coffee mug covered: How LDD put a lid on my camping trip 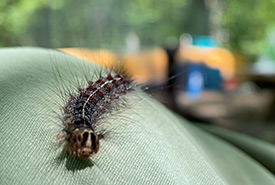 As a west-coaster, I’ve come to relish the soothing splats of raindrops on my tent — so long as, of course, I am dry and warm inside. That sound, that damp smell that steams up from rainforest ferns, they awaken in me memories of friendship and worry-free times in the outdoors.

So, as I fluttered in and out of sleep one morning on a recent camping trip, those pleasant thoughts came back to me again, even though I was far away from BC. This time I was waking up at Parc national d’Oka, a Quebec provincial park about 40 kilometres west from my new home in Montreal. It was my first time camping outside of BC in 20 years.

Despite the familiar sound, there were no clouds around. And the ground outside my mesh tent door was dusty and dry, not plush and soft with the moss that covers the west side of Vancouver Island. And the raindrops were not sliding silently down the fly, but rather tumbling like boulders down a mountain slope. (The beauty and horror of waking up without your glasses on is that your imagination is king: were they raindrops? Seeds from a tree? A racoon drumming its fingers on the fly?) 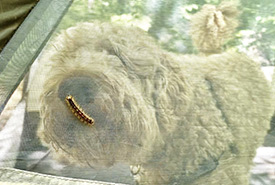 My partner's pup, Fergus, sniffing out a caterpillar through the tent mesh screen (Photo by Jensen Edwards/NCC staff)

I crammed my glasses onto my face, and it all came into focus. The morning sun silhouetted a handful of long, skinny creepy-crawlies, inching their way across the yellow tent fly. Outside, the bark on the maple and oak trees swirled and slid like some hallucination. Everywhere, Lymantria dispar dispar (LDD), formerly called European gypsy moth, were swarming and searching for food.

LDD is a European species introduced to North America in 1869 and now taking over groves of forest from Quebec to BC, munching through valuable tree cover in cities and rural landscapes as it travels. This species has changed the way we enjoy the natural places we cherish, and it has a knack for outsmarting our efforts to restrict its movement and growth. 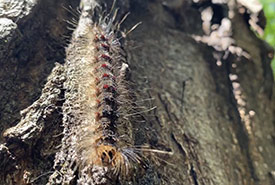 The caterpillar went up, the frass came down, hickory dickory dock (Photo by Jensen Edwards/NCC staff)

The raindrops I woke up to, it turns out, were actually the digested remnants of the forest canopy, tumbling from the thousands of insatiable caterpillars above. Naturally, my group adapted by covering our morning coffees with bowls, plates and books as we rested between sips. Hats were necessary too, lest you wanted to be shaking caterpillar frass (the technical name for caterpillar droppings) from your hair for the next few days.

Camping, they were a mere nuisance. My group tried its best to keep the bugs off our skin (the fuzzy hairs on LDD caterpillars can — and did — cause rashes) and to keep our meals frass-free. But when we got home, we recognized how they could quickly become a problem. 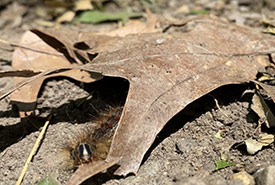 Peekaboo, I see you, caterpillar! (Photo by Jensen Edwards/NCC staff)

As we laid out the tent flies and tarps to clean off the splats of frass, bugs and leaves, we (I should say “I” here actually, as I am really not a bug person) recoiled when we found some of the caterpillars had hitched a ride home with us.

We saw, then, how easy it is to accidentally introduce an invasive species to a new habitat. So, we dealt with the few we found on our equipment accordingly: either squashing them or drowning them with water. Surely not a pleasant end for the bugs, but a necessary one to try and prevent them from further damaging a neighbourhood already devastated by the emerald ash borer.

PlayCleanGo is a U.S.-based initiative, adapted by the Canadian Council on Invasive Species since 2016, that offers tips on how we can prevent the spread of invasive species, geared toward the type of nature-based activity you’re planning. For tent campers like me, they say to not bring firewood with you, but rather buy it directly from the campground or a nearby vendor. They also say to do thorough sweeps of your gear before you head out to a location, and before you pack up to go home. Even when you think you’ve done a good job, there may be some bugs or seeds that tuck themselves away into the wheel wells of your car, or even in some more dark and cozy places.

Four days after leaving Oka, one member of our group sent us all a text:

“If any of you campers have yet to go for a run since the weekend, make sure you empty your running shoes *thoroughly* before putting them on… speaking from experience.” 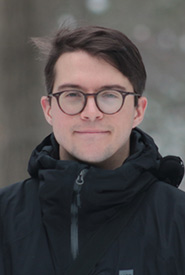