Keep your eyes peeled for turtles 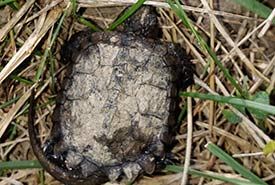 A baby snapping turtle, estimated to have hatched the morning when this photo was taken, spotted travelling from a busy four-lane road in Newmarket, Ontario. (Photo by Aileen Barclay, program manager for Oak Ridges Moraine Land Trust and forest education specialist with the Regional Municipality of York)

Each year, from May until July, Ontario’s freshwater turtles leave the wetland or water body where they live and look for nesting sites. This means they often have to cross roads to get to their destination. Some turtles even see the highway’s gravel shoulders as suitable places to lay eggs. Turtle hatchlings emerge as early as mid-August in a warm year, or later in the fall in a cooler year. In my local naturalist group, I’ve already seen members posting photos of baby snapping turtles in long grasses. Needless to say, we must pay extra attention to where we put our feet and when we travel on roads, for adult and baby turtles alike.

The stakes are high for turtles. It takes years for them to reach reproductive age, and taking one mature adult out of the ecosystem can impact local populations. This is why there are often turtle crossing signs on roads with nearby wetlands or creeks, encouraging motorists to slow down.

As summer wears on and run-ins with turtles (maybe even some at-risk species) are still common, I want to share an uplifting tale of perseverance and courage about kids and their love for turtles. A group of three to 10 year olds were the inspiration for and the humble beginnings of the Kawartha Turtle Trauma Centre (now part of Ontario Turtle Conservation Centre).

Cameron McNab and his siblings were students at a Peterborough, Ontario, outdoor education centre with a nearby creek. The kids often saw turtles cross the road to their nesting site during breeding season, including seeing those hit by vehicles. Concerned for the reptiles’ safety, Cameron, his siblings and some friends erected a handmade turtle crossing sign. In 2000, this group of kids dubbed themselves “Kids 4 Turtles” and their advocacy journey begun.

Kristy Hiltz, Cameron’s mother and one of many parents behind Kids 4 Turtles recalls proudly, “I think Kids 4 Turtles was such a unique project because the parents didn’t lead the kids at all; the kids led.”

Sadly, the newly minted sign was torn down by vandals less than 24 hours after it went up. Overcoming disappointment and with the help of their parents, the kids looked for more permanent signage. They creatively fundraised for the signs while also bringing awareness to turtles by educating the public on turtle conservation.

But the most daunting task of all might have been for the kids to stand in front of municipal council to convince politicians to approve their signs. “There was a little bit of resistance, so it was my job to make sure the kids were supported,” said Kristy. One after another, each child made their case, reading the speeches they had prepared.

Touched the by children’s passion, the council voted unanimously for the signs, which were later installed at 14 locations.

Kristy, who is also a veterinarian, garnered support from peers and biologists, and professionals from the community about the legitimacy of this project. It was more than a cute kids’ campaign. Eventually, she gained support from the local zoo to run the project and established the Kawartha Turtle Trauma Centre, where injured turtles and reptiles can be treated and rehabilitated.

The Nature Conservancy of Canada (NCC) has a good rapport with the centre, bringing injured turtles for care when needed. Saving every turtle is critical to their survival. With a similar goal of educating the public, NCC has shared tips on how to help turtles cross safely and ways to contribute to turtle conservation through habitat protection. For example, NCC has restored wetland habitat suitable for turtles in southwestern Ontario through wetland construction and by controlling non-native invasive phragmites. Phragmites grows rapidly and can quickly take over open areas otherwise suitable for nesting by turtles.

You can report turtle sightings on iNaturalist, or if you’re in Quebec, using carapace.ca.

It’s always inspiring to see bloom the seeds sown for conservation. The kids from Kids 4 Turtles are grown now, but their impact on the community can still be seen through the work of the Ontario Turtle Conservation Centre.

As we head into cooler weather and outside for fresh air, remember to keep an eye out for turtles as you pass by roads near bodies of water. You never know if you might just be sharing the road with a species at risk.