Murder hornets: What’s all the buzz about? 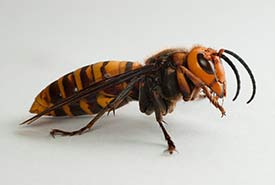 If you’ve been following the news this summer, you’re sure to have seen mention of murder hornets.

After isolated discoveries of this invasive species in British Columbia and Washington state, news about the Asian giant hornet has taken North America by storm — with good reason! Here’s the scoop:

In Canada, the Asian giant hornet was first discovered in the Nanaimo, BC, region in September 2019. Researchers aren’t sure how the hornets got into Canada, but it’s possible they arrived from Asia through packaging material or hiding under imported gardening pots.

The BC government, Canadian Food Inspection Agency (CFIA) and local beekeepers were able to round up the population and destroy the nest in 2019. In May 2020, there was another discovery of the Asian giant hornet in Langley, BC, approximately 100 kilometres away from the Nanaimo detection. Local beekeepers and the CFIA were once again able to destroy this nest and are continually monitoring for new sightings. Since Asian giant hornets live underground in tunnels or spaces under rocks and homes, it can be challenging to find them early.

In Washington, where Asian giant hornets were also found in 2019 and 2020, researchers are using infrared technology to detect underground hornet nests. The temperature of their nests runs about 26 to 30 C, making them hot spots on a cold morning. Citizen scientists are using traps with sweet juices and nectar in their gardens to try and catch Asian giant hornets that may be hiding.

Many assume that the name murder hornet comes from its interactions with humans. Asian giant hornets do have a large stinger and deliver one of the most painful stings known to humans. However, murder hornets were given that name to describe their predatory behaviour toward North American honeybees. 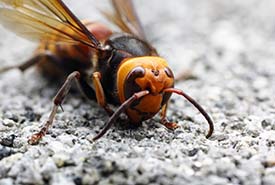 Keep an eye out for Asian giant hornets and report suspected sightings. (Photo by t-mizo, Flickr)

Domestic honeybees and wild bees in Canada are integral to food production and healthy ecosystems. The best way we can help protect our pollinators is to keep watch for Asian giant hornets and report suspected sightings.

While these hornets have only been found (and eradicated) on the West Coast of Canada to date, climate models show that southern Canada is well-suited to host them should they get past the Rocky Mountains or be accidentally introduced. With all invasive species, and especially Asian giant hornets, community members can form an invaluable and united front, and cover a lot more ground than researchers alone can. Finding and reporting invasive species as soon as they arrive is incredibly important in ensuring a response can get underway quickly and efficiently. Check out common look-alikes in the photo below and visit the Invasive Species Centre website to find reporting options for your province or territory.

David Dutkiewicz is the entomology technician at the Invasive Species Centre.