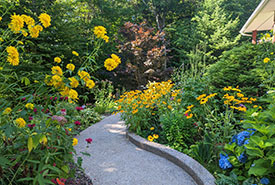 My garden has come a long way in two years! (Photo by Jaimee Morozoff/NCC staff)

As my colleague Wendy mentioned in her blog post, native plant gardening is full of trials and tribulations. Depending on where you live in Canada, sometimes the “typical” native plant looks quite different. Across the Prairie provinces, there are a variety of native wildflowers that fit the model of typical garden flowers, while across other regions of Canada where forests are the primary landcover, a native garden might look a little different. Here in Nova Scotia, the Wabanaki (Acadian) forest covers most of the province and is a diverse and beautiful place, full of lots of options for planting native species. Native prairie flower species get a lot of attention in native gardening, and I’d like to highlight some of my findings while looking for native species in Nova Scotia. 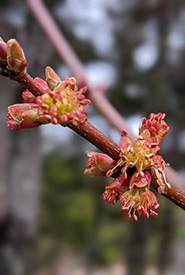 A key component of any native plant garden, and especially important in naturally forested areas, are shrubs and trees. Many shrubs flower early in the season and provide important early food sources for pollinators. They have berries later in the season for birds and other critters (or you, if you are fast enough). Shrubs and trees are also common host plants for various caterpillars, which in turn become the butterfly pollinators we all love to see. Species like blueberries, Saskatoon/service berries, cranberry, cherries, currents, willows and maples are all examples of early flowering shrubs. 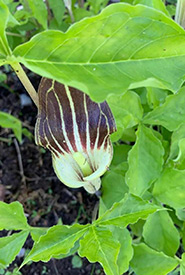 Jack in the pulpit (Photo by Jaimee Morozoff/NCC staff)

Sometimes you just want a beautiful flower in your garden, and a great option in forested habitats is planting spring ephemerals. Spring ephemerals (the designation of which gets a little blurry depending on who you ask) have to complete most of their life cycle in the early spring before the trees and understory shrubs leaf out and completely take over most of the available light. These plants evolved to flower before the forest is shaded by leaves. Early summer forbs appear right after the ephemerals, and also flower early in the season but often have foliage that lingers. Native species within these groups include bloodroot, violets, Dutchman’s breeches, Jack in the pulpit, trilliums, trout lily and bluebells.

Your native garden doesn’t have to be perfect 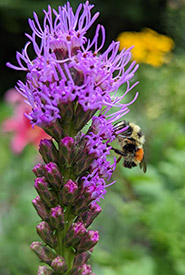 Creating a garden feels a lot like painting — you add in little bits of colour and texture until you find something you are happy with. Don’t feel like you must have a garden made up of only native species to be successful; you can start a little at a time and keep building. In my garden, I have spent a lot of time sourcing and planning for my native flower species and planting native fruit-bearing shrubs. I have also made space for some of my favourite prairie plants, like blazing star and black-eyed Susan, to remind me of my garden in Alberta, as well as some pretty flowers I just love, like dahlias. There are also food plants scattered throughout my garden.

Holes in your plants can be good 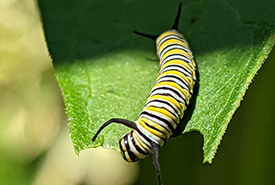 In the theme of perfection, it is also important to note that a goal of a native plant garden is to support native species. You can expect to see your plants being eaten, fruit being nibbled on and bees buzzing around. It can feel counterintuitive sometimes to spend all this time cultivating a native plant to have it eaten, but it’s a tangible measure of the impact you are having on native wildlife. A great example of this is the surge of people planting native milkweed species in their yard and watching anxiously for monarch caterpillars. My patch of swamp milkweed is currently home to 10 large monarch caterpillars, and while my milkweed plants are looking a little worse for wear, those caterpillars bring us joy every day. It is still important to control some of the non-native critters you have in your garden as they can be destructive and negatively impact native species but using non-chemical methods of control will ensure your “good bugs” and other species aren’t impacted.

Posted in: Time for nature, Gardening 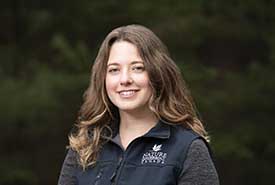