What one habitat type runs through every province and territory, surrounds communities where most Canadians live and covers about 40 per cent of the country? If you guessed forests, you'd be right!

We’re lucky to live in a country dominated by leafy giants. Roughly 3.6 million square kilometres of Canada is covered in forest. Canada contains nine per cent of the planet's forests and some of the largest areas of remaining intact forests occur in the boreal region. 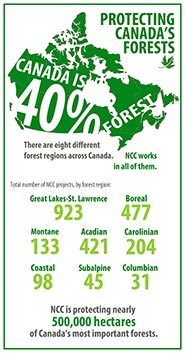 Canada’s forests are special places of irreplaceable beauty and significant biodiversity. They are an important part of every Canadian’s life. Forests purify water, regulate and cool climate, absorb carbon dioxide, produce oxygen and provide habitat and shelter for countless species.

Since 1962, the Nature Conservancy of Canada (NCC) has helped directly protect nearly 1.2 million hectares of forested habitat across Canada. There are eight different forest regions across Canada. That's more than twice the size of PEI! NCC works in each of these, and each has its own unique characteristics and needs: 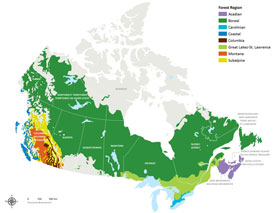 Canada's forest regions (Click on the image to enlarge)

The Acadian forest is located in the Maritimes and boasts a rich diversity of more than 30 tree species, including yellow birch, red spruce, American beech and sugar maple.

Close to 75 per cent of the country’s forests are found in the boreal zone of northern Canada. In fact, Canada’s boreal forests are some of the largest and most intact forests left on Earth. Predominant tree species include white spruce, black spruce, balsam fir, jack pine, white birch, trembling aspen, tamarack and willow.

At just one per cent of Canada’s landmass, southwestern Ontario’s Carolinian forests support around one-third of our country’s species at risk, including Acadian flycatcher and cucumber tree. Predominant tree species include beech, maple, black walnut, hickory and oak.

Found along Canada’s West Coast, coastal temperate forests originally occupied less than one-fifth of one per cent of the Earth’s surface, and over half have since been extirpated. Predominant tree species include western red-cedar, western hemlock, Sitka spruce and Douglas-fir.

This forest region occurs in British Columbia at lower elevations along river valleys and is interspersed with subalpine forests. Predominant tree species include western red-cedar, western hemlock and Douglas-fir.

A mix of coniferous and deciduous trees, including white pine, sugar maple, yellow birch and eastern hemlock, can be found in this forest region of central Canada.

Here are some facts about forests that can be found on properties owned and managed by NCC across Canada:

NCC’s most northern property with forest:

NCC’s most southern property with forest:

NCC’s most eastern property with forest:

NCC’s most western property with forest: