Pileated woodpeckers in the city 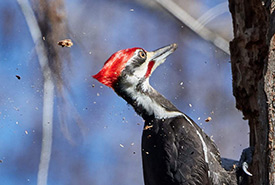 If you go birdwatching, you might take your binoculars and plan on sitting for hours at the edge of a marsh or grassland, waiting for the birds to come. If you want to see pileated woodpeckers, you’ll likely go out into the forest. However, did you know that you might see one of these large birds right in your own backyard or just around the corner?

Pileated woodpeckers are the largest woodpeckers in Canada. Measuring 40 to 49 centimetres in length, they are about the size of a crow. They are mainly black except for several white stripes on their face that extend down to their chest and wing area. They have bright red crests on top of their heads. Like other woodpeckers, they have long tongues, sometimes three times the length of their bills, that help them access carpenter ants or other insects inside the trees they’ve excavated. 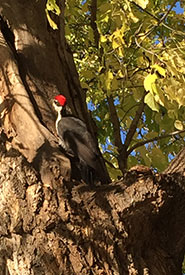 Pileated woodpecker in a tree (Photo by Susan Huebert)

Pileated woodpeckers have very strong skulls with adaptable bills that allow them to peck hard enough to break the bark apart without injuring themselves. Each blow of their bills on a tree can be heard a kilometre away. Although this excavating is about acquiring food, it can also be about hollowing out a nest for the adults to raise their young. Often, other animals will later use these rectangular holes once the woodpeckers are gone. On the other hand, woodpeckers will also drum on trees to communicate, producing a sound used to advertise their territory or attract a mate, much like a songbird sings.

Mature deciduous or mixed deciduous-coniferous forests are the most natural spots for these large birds, but they sometimes dwell in cities that have large, dead trees. Several years ago in Winnipeg, Manitoba, I was coming back from a walk when I heard a loud pecking sound nearby. I looked up into one of the large trees in the front yard and saw a pileated woodpecker busily making a hole in it. 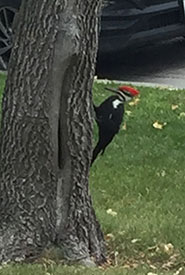 Although the house was near a creek, it was still within the city, and I wondered how the woodpecker had found that tree. As I took picture after picture, the bird continued to pound vigorously at the tree.

A third time was even more of a surprise as I saw and heard a pileated woodpecker just a short distance away from my apartment block, pecking away at a tree nearby. I filmed the bird for several minutes while it ignored me and continued to pound at a spot quite close to the ground. Later, I found that the bird had opened up a large hole in the side of the tree, which will likely provide a home for birds or other animals over the winter.

Pileated woodpeckers are fairly common in Canada, but seeing them in the city is special. If you look around and listen when you are outside, you too might be able to see one of these large birds near where you live.

If you have a dead or dying tree in your yard that is stable, consider leaving it to attract pileated woodpeckers and provide habitat for other animals to forage or nest. You may even consider putting up a suet bird feeder or a nest box to attract breeding birds. 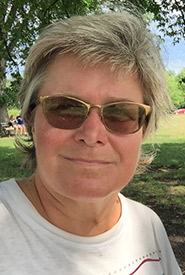 Susan Huebert is a writer and editor from Winnipeg, Manitoba.