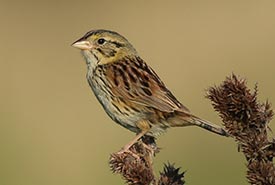 One spring day last year, I was doing what I always do: walking the family dog and noting on my ebird app what birds were around. This daily ritual exercises the dog and allows me to collect data on what birds and wildlife are inhabiting our farm throughout the seasons. Not only does my property have some restored prairie fields, but I’m also surrounded by a number of Nature Conservancy of Canada (NCC) properties that have been restored with native grasslands and trees. This abundance of restored habitat is a mecca for wildlife, both common and rare.

This particular day was special because I heard the distinct yet simple and short hiccup of a song produced by one of our rarest and most secretive grassland birds. A bird that I had hoped to find one day. In fact I was studying its song all spring so that when I did hear it sing, I would recognize it instantly. I knew the habitat that NCC had created was perfect for this species. On this evening, the stars aligned and in the distance I heard “tsillick.” A male Henslow’s sparrow had revealed its presence to me. 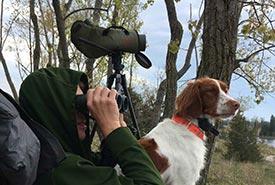 I instantly knew what it was, but I couldn’t believe my luck and had to see it to believe it. I was super excited and followed my ears to its general location before scanning the vegetation for the source of the song. Frustratingly, it was rather hard to spot, as the sun was beginning to set. Henslow’s sparrows often sing in the evening when there is less birdsong from other species, so that a potential mate might have a better chance of hearing them. Eventually, I spotted the songster perched atop the head of a bushclover, throwing his head back every time he let out his song. NCC had provided the habitat, and the Henslow’s sparrow found it. 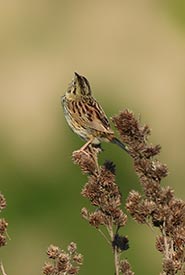 Henslow's sparrow throwing its head back every time it let out his song. (Photo by Adam TImpf)

I kept tabs on my new best friend throughout the spring and summer, hoping he would find a mate and produce the next crop of endangered Henslow’s sparrows that could begin to colonize more of NCC’s restored properties. Unfortunately, I don’t believe he was successful in attracting a mate, but one can’t be too sure since a female doesn’t sing and is very hard to detect. I’m waiting anxiously to see if Mr. Henslow returns to set up his territory this year; so far he hasn't shown up. I’m cautiously optimistic that this species will again breed in Ontario due to the amount and quality of habitat that NCC has created and continues to restore.

The NCC property is one of our Central Big Creek Block properties in Norfolk, ON. It is 30 hectares (74 acres) of former agricultural field and was restored with a planting of mixed grasses and herbaceous and woody native species in 2011. More recent additional restoration in another section of the same field includes planting of chestnut trees.

NCC has been working on long-term management of invasive species in the field since the restoration in 2011, including garlic mustard, multiflora rose and autumn olive removal. This is the first known record of the Henslow's sparrow in the field since it was restored.

Adam Timpf is a biologist and naturalist who was raised in and currently lives in Norfolk County.