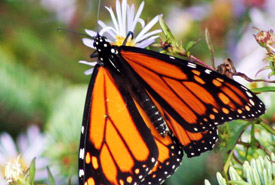 June is my favourite month. That time of year when you’re on the cusp of hot summer weather, daydreaming of how you’ll spend the dog days of summer in some sort of lake or having a picnic in the shade. For gardeners like myself, it’s the most exciting and hopeful time, having just planted your garden while the nature around you explodes into different shades of green.

On most days off, I spend a portion of my time getting to know my garden. Seeing how much it changed from my last visit. Checking for new growth. Seeing if plants need water or more space to flourish. I don’t have a pretty garden. I opt for using my hands and small tools over machines. I leave things to compost to return nutrients back into the soil. I also leave certain “weeds” to flourish, knowing insects and birds like their flowers. There are several milkweed patches in my garden, solely for monarch butterflies. One of these patches isn’t far from the rhubarb patch.

On a Friday off in June, it was rhubarb harvest time. I had planned to make a rhubarb impossible pie. While out choosing the ripest stalks, I accidentally harvested one stalk that had a monarch chrysalis attached to the underside of a rhubarb leaf. When I realized what I had done, I promptly returned the stalk to its original location in the rhubarb patch, propping it against the remaining stalks, hoping I didn’t disrupt the chrysalis. Then I took off for my camera. 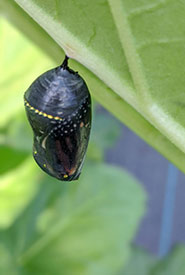 The chrysalis was black in colour, so I knew it was getting close to hatching. When I came back, phone in hand, I was able to get a closer look. While crouched down and with my neck in angles I didn’t think were possible, I noticed the outside of the chrysalis was translucent and full of black liquid. You could distinctly see the monarch wrapped inside; its wing pattern was viewable from my angle.

Now to decide: Do I wait to witness it hatch, or do I go on with my day? I decided on the latter, not knowing how long it would be until the butterfly emerged. (I’ve later learned that once the top of the chrysalis pleats expands like an accordion, hatching is very close). I made a mental note to visit the patch later in the day to observe any progress. Then off I went to make my pie. 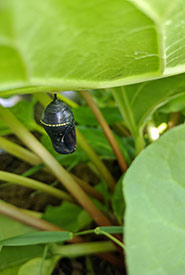 To me, monarch butterflies are a symbol of how quickly species can decline. Growing up in the 90s, I remember monarchs being a common sight, often just another insect that was flattened into the front of the family van among grasshoppers and flies. Now monarch butterflies are designated as endangered by the Committee on the Status of Endangered Wildlife in Canada. As an adult, seeing a monarch butterfly is exciting and often prompt squeals of delight and a moment of pause. It’s even more special to observe a monarch flicker about on my own property, using the plants I’ve grown or left for them.

So, when I visited the rhubarb patch later that afternoon to see if the monarch had emerged, I was delighted to find that it had and quietly welcomed it to the yard and hoped the flower seeds I had just planted for nectar would entice it to visit me again.

The monarch butterfly is one of 17 species featured in the Nature Conservancy of Canada's gift giving campaign: Gifts of Canadian Nature. To learn more and to give the gift of conservation this holiday season, click here. 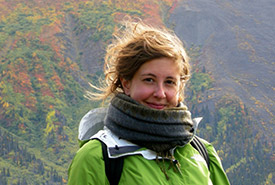 Lisa Maskus is the regional program coordinator for the Manitoba Region of the Nature Conservancy of Canada.