Heard it from a Scout: Leaving only footprints in nature 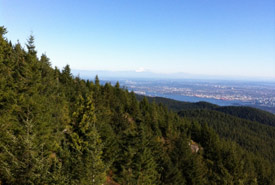 View from the top of Eagle Bluffs, BC. (Photo by Emilie Diver)

The view was incredible and the challenge of the hike up to the Eagle Bluffs in North Vancouver made it even more worthwhile. Ruby, my yellow lab, was happily sitting and begging for food from me and my Scout troop. Her behaviour was in stark contrast to the nearby wildlife helping themselves to whatever they could eat: leftover apple cores and sandwiches or food that some other hikers were feeding to the birds, right out of their hands.

There are many reasons to take care of nature and the environment we engage with on a daily basis. For me, it begins as a desire to see less human impact on nature. I often see trees being cut down for residential development, plastic in streams and rivers clogging up the natural flow, and wildlife being killed when they develop a dependency on humans for survival or become impacted by our actions. Habitat degradation is something that we hear about often in British Columbia, since bears and cougars don’t live far from residential areas.

I’ve grown up understanding the basic concepts of having minimal impact on the environment. More recently, I have been learning how to instill this philosophy in friends I take hiking, by teaching them how to have respectful, environmentally low-impact adventures by leaving no trace. 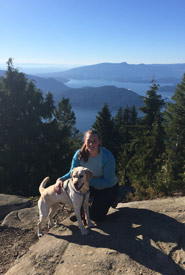 On that day hike up to the Eagle Bluffs, I learned how important it is to respect the natural behaviour of wildlife. While we were getting ready to head back down the mountain, I pulled out some moleskin to apply to blisters that were growing on my heels. In the process, I left my bag open and my red wallet poking out. This wallet held all of my important documents: my driver’s licence, health care card, credit card, debit card, student ID and shopping cards.

I didn’t notice a raven hopping closer and closer to my bag, and just as someone yelled “watch out!” the bird snatched my little red wallet out of my bag and flew off over the cliffs with it. I thought it was gone and that I would have to replace everything. I was angry that the bird had taken my wallet, but even more so that the raven had been conditioned to think it could be food.

The raven flew a couple of circles far from the cliffs. At any point it could have dropped the wallet into the forest where I never would have found it, but it didn’t. It circled back and flew toward us, just to the east of where I was standing. I ran down to where the bird landed and where it sat staring at me with my wallet on the ground next to it. The raven flew off again, leaving my wallet behind. I dove on it, relieved it wasn’t lost!

This situation had me rattled, but less about almost losing everything in my wallet and more about the behaviour of the other hikers. Even after they saw this happen, I witnessed another group of hikers feeding seeds and bread to the birds as we were leaving. It made me wonder how people learn about the environment and their role in interacting with it.

In British Columbia, and specifically near Vancouver, bears and cougars get close to residential areas and into garbage bins. This is particularly dangerous for bear cubs, since they won’t learn how to hunt for their own food when they become independent of their mothers. It is up to us to protect these and other animals and remove the things that attract them to our homes and neighbourhoods, while recognizing that the way we behave could teach wildlife to come near humans.

Taking care of our environment should happen all day and every day. It includes small things such as securing garbage bins and not actively feeding wildlife on hikes, and it extends to having minimal impact on our environment. This principle of leaving no trace applies to where we live, travel and play. We need to be prepared and know the sensitivity of the area, pack up all garbage and properly dispose of waste. Leave behind nothing but footprints. It’s important to be mindful in every action we take and to remember that we share this Earth with other creatures.

"Heard it from a Scout" is written by members of Scouts Canada’s Youth Spokesperson program. This post was authored by Emilie Diver.