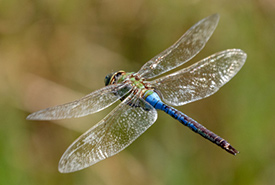 In February when I wrote this blog, I was thinking about my “snowbird” colleagues taking vacations to escape the cold, Canadian winter. Little did I know that right around that time, a species of dragonfly was beginning to migrate hundreds of kilometres from the southern U.S., as far as Mexico and the Caribbean, back to Canada. And I learned that three of my colleagues had researched this topic prior to joining the Nature Conservancy of Canada (NCC).

In an old meadow, on a fall day in the beautiful Bruce Peninsula, Grace Pitman delicately swooped her butterfly net at the agile dragonflies that had been evading capture.

An assistant of conservation biology for NCC’s southwestern Ontario Region, Grace vividly recalls her encounters with the winged insects. While studying monarch butterflies for her masters of science thesis in 2015, she was working on a side project on the common green darner dragonfly migration. The research was supported and guided by the principal investigator — Professor Ryan Norris of the University of Guelph — who was recently appointed as NCC’s Weston Family senior scientist.

“I love all insects, but dragonflies were my first love and were my introduction into the fascinating world of entomology,” says Grace. She hopes the project will add to the knowledge about their multigenerational migration and life history, which scientists are just beginning to understand. 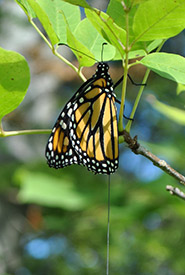 A tagged monarch hanging from a branch (Photo by Grace Pitman) 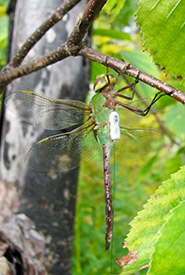 A common green darner with spread wings, clinging vertically to a branch. (Photo by Grace Pitman)

“The size and weight of radio transmitters have decreased steadily with time, so it’s relatively recent that they could be used for [tracking insects],” Grace noted. And gathering her study sample was a test of patience itself.

“Catching the dragonflies was not easy. Sometimes a few would be flying in a swarm, but usually they were too high up to reach. Often, I would watch for movement while they zipped around my head and wait for one to land on some vegetation before trying my luck with the net,” says Grace.

All individuals were released once their measurements and information were captured. 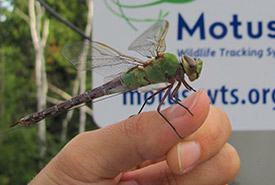 A common green darner with a tracker. (Photo by Grace Pitman) 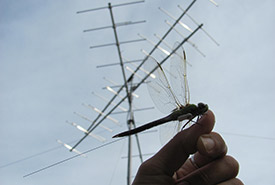 A tagged common green darner about to be released at the base of a MOTUS tower at Bruce Peninsula. (Photo by Grace Pitman)

Sam noted that there have been few studies that tracked insect movement. This was the first to use an automated tracking device to track individual flying insects during migration. Before this, only one other study had tracked individual flying insects (common green darners) during migration, using a plane. So, the 2019 University of Guelph study really showed the first migratory tracks, speeds and distances recorded over vast distances for this species.

Besides tracking using radio transmitters  another method is using stable isotopes, which shed light on the timing of migration and the origins of the dragonflies in the migration journey. As more research is conducted using different methods, scientists can learn about the flyways that dragonflies use and the effects of temperature on their movements, with implications of climate change and its impact on migration.

Reflecting on the research that she started five years ago, Grace was thrilled to be a part of this novel research, and she got a glimpse into the secret lives of these impressive migratory flyers. “I believe there is still much more we can learn about migratory insects and how best to protect migratory routes and stopover locations,” she said.

I am eager to look for these amazing migrant dragonflies on my next walk near a wetland. And I can’t wait to tell my three-year-old about the dragonfly’s journey and why we need to protect their habitats, so these "dragons" can fly freely for generations to come.