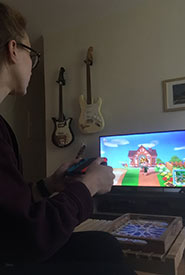 COVID-19 has taken a lot of things away from Canadians. Our physical connections to nature and to each other have taken a back seat when it comes to limiting the spread of the virus. With group hikes, outdoor volunteer events and social gatherings in parks out of the question for the time being, at least in some parts of the country, many of us look to technology to fill the void during this time.

I’ve always connected to the land, water and wildlife within Canada through photography and videos. I have been craving the excitement that comes with going out and exploring a new place and identifying new species, something that I haven’t been able to do for the past several months.

But a few weeks into the Ontario-mandated stay-at-home order, I found myself on an unknown island, occupied by species both unknown and known to the fresh waters of Canada. This magical place is called Meekee Island.

Named after my dog, Meekee Island is a fictional place I’ve created within the video game Animal Crossing: New Horizons. In addition to the anthropomorphic residents that live there, like a goat named Sherb, there are species flying about and swimming in the island’s waters.

I need to jump in here to say that I’m in no way a gamer. Apart from playing Super Mario on the original Super Nintendo with my sister and dad while growing up, I tend to stay away from any and all things console-like.

It wasn’t until my partner and I set up a Nintendo Switch and booted up Animal Crossing that I took an interest in my childhood hobby. And soon as I casted my rod into the flowing waters on my island and pulled up a goby, a species invasive to Canada's fresh waters, I was hooked.

I was surprised by how accurate the goby looked, expecting to pull up a cartoon fish. Each fish species within Animal Crossing is visually portrayed nearly as close to what you would find in a scientific textbook or field guide. Fishing in a pond or river in the game can result in many species found in waters here, too; for example, catfish, carp and even bass. I wasn’t expecting to fish for the same species in this virtual place as I do when I’m camping by Lake Ontario.

Blathers, a very wise owl and island resident in charge of the Meekee museum, also tells me accurate facts about each species. I found myself calling out to the screen “Hey, I knew that!” once or twice when donating fish for the island’s aquarium.

And while most of the species are familiar to me from having studied them in real life, I still find myself learning new things about a particular fish or learning about new species that live in our oceans. I’ve also taken an interest in finding and learning more about butterfly species and other insects living both on Meekee Island and within North America.

We humans have had to get creative to maintain our connections to the world around us and the other species in it. Although I still rather fish and study the real thing, I can’t help but find solace on my island. Here, virtually, I’m surrounded by trees, wildlife and water while staying healthy and safe.