From fear to awe: Spooky finds in nature 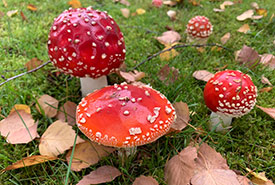 If you ask me what’s the scariest thing that happened in 2020, I’d say COVID-19. It forced many of us to re-examine our lives and even our relationship with nature.

While I’ve often described nature as beautiful, fascinating and full of wonder, I’ve never thought of it as scary. But as I look back on the year, two encounters afforded me with great learning opportunities and, in hindsight, were hair-raisingly spooky.

There are over 9,000 of species of mushrooms and other fungi in Canada. Some mushrooms look unassuming while a great variety are weird and wonderful. As a kid, I thought that all wild mushrooms looked like the iconic toadstool in Super Mario. I later learned that the real-life version is a species called fly agaric, and they’re poisonous. Fun fact: They were once used to poison flies!

Every year, there are reports of people getting sick from eating poisonous mushrooms. The wetter conditions of autumn are particularly favourable to mushroom growth. The mushroom that you see above ground is the productive, fruiting body. Below ground, there’s a network of fine filaments, called mycelium, that absorb nutrients, kind of like roots for trees. And when conditions are right, a fruiting body develops, matures and releases spores that can grow new mushrooms.

Scientists have also found that some plants “communicate” with each other through mycelium (think of it as underground internet, the dark web...hmm, spooky). For example, plants under stress from a pathogen can send defense signals to neighbouring healthy plants to signal them to increase their pest resistance. Nutrients and water are also transferred through these information superhighways. Truly fascinating. 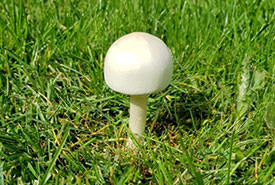 I was delighted to see friends sharing their fungi finds on trails on social media. One day, my dad sent me a photo he’d taken of a pure white mushroom in his lawn. It was a clubby, quaint specimen. I immediately wanted to know the species' name. The problem is, mushroom identification can be tricky, even for experts. There are many lookalikes; for example a young puffball (edible) looks like a young death cap (toxic and potentially deadly). The developmental stage and location can give clues to narrowing down the species. 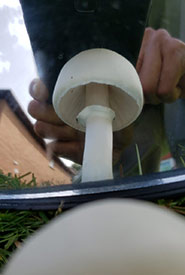 My quest to pinpoint my dad’s specimen led me to the amanita genus. One biologist suspected a destroying angel, another suggested a death cap — talk about eerily beautiful names! Regardless, these mushrooms are not uncommon on urban lawns. The spooky part is, if my dad hadn’t discovered it and been curious enough to share his finding with me, my toddler, who normally spends the day at his house, might have picked it or even taken a bite. With this knowledge, I shared my encounter with fellow parent friends and suggested they keep the local poison control number handy.

Leaves of three, let it be

In early fall, my family took advantage of a mild day for a hike on a nearby trail. I watched my two young kids like a hawk to keep them from veering off trail and trampling plants, and to ensure they didn’t ingest or touch anything they weren’t supposed to. 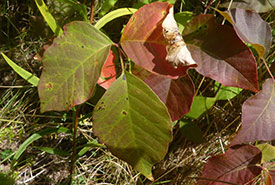 My spouse has a more liberal approach though. He was surprised to learn that poison ivy is quite common in disturbed lots or edge of forests in Ontario. He had never heard of the plant, but I was well aware of the rashes it can cause. My elementary school teacher was probably the one who taught me the rhyme: “leaves of three, let it be.”

I’ll admit that I rarely dabble in plant identification, and instead rely on apps like Seek by iNaturalist. It’s a great tool for amateurs like me. But all programs have their limitations, and on that day, it misidentified what was probably a non-noxious plant for one that is. 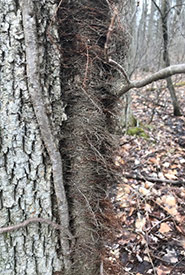 We were sitting on a log with our bums brushing up against this. Out of curiosity, I scanned the plant with my phone for an ID.

“Holy smokes, we have to move! It’s poison ivy,” I exclaimed.

It didn’t look quite like poison ivy from what I read online, but that was not the time to doubt the ID (later discovered to be misidentified). That bothered me for the rest of the day. I spent the next two hours at home taking quizzes to train my eye to pick out poison ivy from lookalikes. 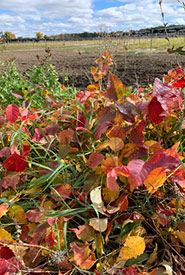 Four rhymes to help you remember the characteristics of poison ivy:

Luckily for us, that was our only scare for the day. The more I learned about the plants, the less there was to fear. The poisonous nature of some species is often their defense against predators.

I have nothing but respect and awe for these species, and I’m lucky to have access to many urban green spaces. For Halloween, maybe we’ll recite some of the rhymes above in place of a spooky story.