The story behind the carapace platform 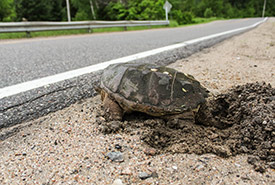 On World Turtle Day (May 23), I will kick off a third season of carapace.ca. Since its launch across Quebec in 2017, the popularity of this online tool, which allows citizens to report the presence of turtles on roads, has been growing. Every success sprouts from an initially good idea, so let me tell you how this came about.

It all began in spring 2015 when our partner and volunteer Daniel Toussaint, a biologist at the Ministère des Forêts, de la Faune et des Parcs at the time, launched a public appeal. His request was simple: seek the cooperation of residents from the Outaouais and Laurentian regions in reporting the presence of dead turtles or snakes along roadsides. His objective was to identify the main sites for fatalities and, as a result, better protect species that are at risk or likely to be designated as threatened or vulnerable. 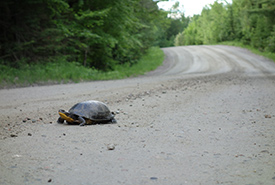 This initiative enabled us to record nearly 70 cases of turtle deaths on roads in the Outaouais and Laurentians. Given the success of this approach, I thought that we should pursue the effort, but I could not handle the dozens of calls from the public during the summer season, as I was busy collecting data in the field.

We had to find a way to do it no matter what, however, as the need was critical. This was confirmed in a meeting with experts studying turtles in Quebec; they stated that we needed to increase our road fatality data on turtles to better assess the issue and find solutions.

Meanwhile, our latest Blanding’s turtle inventories had required a lot of resources for limited results. In July 2014, we selected nine sites in the Pontiac region where Blanding's turtles were likely to be present and where little to no research was previously done. Between July 7 and 18, 2014, we only captured one Blanding's turtle. Was there a way to involve people who live near turtle habitats and see turtles every day? 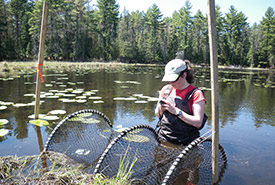 We needed a tool that was accessible to everyone and that was available online. The tool shouldn’t require registration or the creation of a profile, as these can discourage people. One thing led to another, and I ended up discussing the project with a webmaster friend. He said, “Anything is possible! Send me your content and I’ll build you a dream tool, Caro-pace!” (he called me “Caro-pace” whenever we talked about turtles). From that play on words, the name of the project was born: carapace. The carapace of a turtle refers to its hard upper shell, which serves as protection, and protecting turtles is exactly what I wanted to do.

In June 2016, the carapace platform was finally launched in the Outaouais, and it helped us compile about 100 observations in this region and in a few others in Quebec and Ontario between June and October 2016. Given its popularity outside of the Outaouais region, I took steps to extend its use to all of Quebec in the spring of 2017. In three seasons, more than 2,760 turtles have been reported on the platform, and the work will continue for years to come! 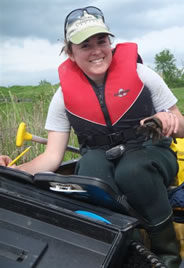 Caroline Gagné is the the program director for western Quebec at the Nature Conservancy of Canada.