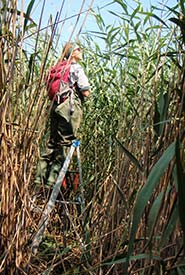 Me on a six-foot ladder amidst European common reed, to illustrate its height and density. (Photo by Courtney Robichaud)

The highs and lows of monitoring the large-scale suppression of Phragmites australis spp. australis

My field crew and I are covered in scratches. I’m a PhD student studying the recovery of native vegetation after invasive species control, so we spend our days identifying plants. At half of our sites, the vegetation is so thick that we can’t see each other when we’re only a metre apart. We have to be careful when we put our metre stick down after measuring the height of the vegetation, since it blends into the stems, and we’ve already lost one stick this week. The plant responsible for the tall, dense stands that relentlessly grab at us is called Phragmites australis subspecies australis (P. australis), or European common reed. You’ve probably noticed it in wetlands, in ditches and along roadways. It’s the tall grass with fluffy beige flowers that turns a deep shade of purple at the end of summer. And it shouldn’t be here.

Our work takes place in the coastal marshes of Long Point and Rondeau Provincial Park, both located on the north shore of Lake Erie, in Ontario. These marshes are some of the largest wetlands in the region and are important for hundreds of species of plants and animals. However, these marshes are threatened by invasive European common reed.

Introduced to Canada in the early 1900s, researchers noticed that stands of these invasive plants expanded exponentially in Long Point in the late 1990s, likely related to low Lake Erie water levels. Over the next two decades, European common reed expanded considerably in both marshes. The stands are dense and tall (standing at least four to five metres), and shade out other vegetation. This displaces native vegetation and negatively impacts the habitat of wetland birds, turtles and other animals.

In 2016, the Ontario Ministry of Natural Resources and Forestry and the Nature Conservancy of Canada, working with land managers in Long Point and Rondeau, started an ambitious project to suppress European common reed. Under an Emergency Use Registration, which is a special approval from Health Canada’s Pest Management Regulatory Agency, they treated over 400 hectares (over 980 acres) of dense European common reed, via helicopter, with a water-safe herbicide in Long Point and Rondeau. Suppressing well-established invasive species can have unexpected consequences on ecosystems. Therefore, it is essential to monitor how effectively this invasive plant species was suppressed, and how wetland plants recovered after treatment. This is where our lab comes in. 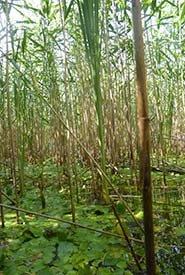 And the results are good news. Herbicide treatment worked extremely well, with an over 99 per cent reduction in live European common reed stems in treated sites one year after treatment. Even two years after, there was still a 95 per cent reduction in live stems. Some re-growth of European common reed occurred in the sites after two years, though it was minimal. This highlights the importance of continued maintenance after large-scale treatment. Encouragingly, herbicide treatment worked well across the entire range of water depths where it was applied. But what about native vegetation recovery? 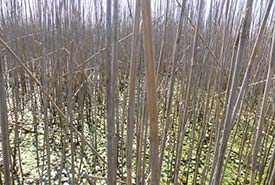 Frogbit after European common reed has been treated. (Photo by Courtney Robichaud) 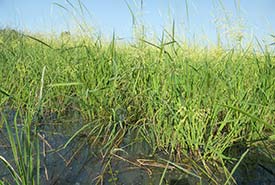 Our results highlight how challenging it can be to remove an established invasive species from an ecosystem. Though challenging, it doesn’t mean it isn’t worth it. In the few years since European common reed has been removed, we have seen benefits to at-risk plants, such as increased populations of endangered bent spike-rush in areas where European common reed once was. Recent research has also documented “significant, positive effects” of European common reed control for wetland birds of conservation concern (e.g. rails and bitterns) in these marshes. Monitoring has continued since 2018, and will continue for long after I finish my PhD. This long-term monitoring means we’ll improve our understanding of vegetation recovery in these marshes, and that new students and technicians will get a chance to lose themselves in these beautiful marshes.

Read the pre-prints of our work to learn more about the vegetation monitoring and the herbicide monitoring.

Courtney Robichaud a PhD student with the University of Waterloo, studying the recovery of native vegetation after invasive species control.