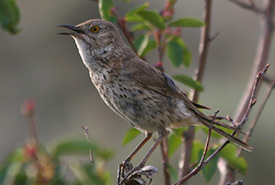 One of the best things about composing music for the concert hall is that inspiration can come from just about anywhere. My latest work, Terminarch, is a 10-minute piece for a quartet of percussionists based on the birdsong of 12 endangered Canadian species. The sound of birds singing may seem like a far cry from the sounds of drums and mallet instruments (marimba, glockenspiel, vibraphone). This was my challenge as a composer — to find a way of transforming the language of animals into music for humans!

The idea of using birdsong in Western classical music is not a new one. As far back as the 1700s, popular composers such as Handel and Beethoven would write melodies that imitate bird calls, usually to evoke a rural atmosphere. Russian composer Sergei Prokofiev used birdsong-like melodies in his narrative piece Peter and the Wolf (1936), in which a bird is represented by a flute, and a duck is represented by an oboe. Then there is the Catalogue d’oiseaux (1958), a series of pieces for solo piano and based almost completely on birdsong by French composer and ornithologist Olivier Messiaen. It is a dissonant and complex piece, as he wanted to represent the intricacies of the birds’ irregular pitch and rhythm. My own approach to using birdsong combined these different strategies. I wanted to preserve these irregularities and also create music that would be accessible to a large audience. 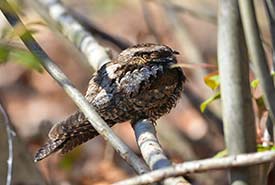 Using the Cornell Lab of Ornithology and xeno-canto.org, I selected and downloaded the birdsong of 12 endangered Canadian species. I put these 12 into four groups, based on the musical qualities of their songs: 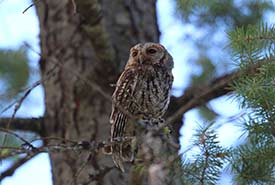 I analyzed the birdsong with software called SPEAR. This program allowed me to upload the recordings and look at their soundwaves as if under a microscope. I was able to see details of pitch and rhythm in each birdsong, beyond what could be easily heard. As if translating between languages, I notated the sounds onto a musical score that could be understood by percussionists. Through this process, I focused on the unique musical qualities of each bird and imagined what combination of percussion instruments would suit them best.

Along with the opportunity to raise public awareness, my interest in using endangered birds comes from my interest in language. I am curious about the extinction of unique languages and how this applies to animals. Not only is there a final individual of a dying species, the terminarch, but there is also a final utterance of a dying species’ language. To me, this piece represents the passing of individual birdsongs through a spiritual hymn that grows from their dissolution, like new life rising from the soil.

I was lucky to travel to Ottawa to work with the University of Ottawa Percussion Ensemble, who did a wonderful job interpreting my music. Terminarch premiered at the University of Ottawa on January 19, 2020, during the Percussive Arts Society’s PAS Days, a weekend-long conference featuring Canadian percussionists and composers. An audio recording of the live premiere can be found here. In the meantime, I’ve been on the hunt for my next big project. Basing my music on sounds from our natural world has been an illuminating experience, and I’m looking forward to doing it again!

Keith Stratton is a Toronto-based composer, performer and music educator.