The birds of southwest Manitoba 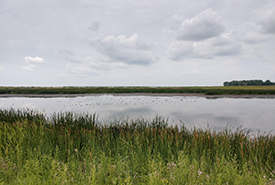 In July 2019, I visited southwest Manitoba for a research scouting trip from the University of Oklahoma. (Photo by Paula Cimprich)

In July 2019, I visited southwest Manitoba for a research scouting trip from the University of Oklahoma, where I am a PhD student in the biology department. I was scouting for bird species and potential study areas to help with a University of Oklahoma study, which is investigating whether bird migration patterns are changing in response to climate change and if changes to the atmosphere affect certain bird species’ migratory habits. Of particular interest were long-distance nocturnal migratory birds that use the Central Flyway (migration route). Southwest Manitoba happens to have several breeding species that fit these criteria.

My initial phase involved contacting local researchers in Manitoba for advice on locations where I could find the birds I was interested in for this study. This led me to the Nature Conservancy of Canada’s (NCC’s) office in Brandon, where NCC staff were quick to respond and generous with their time in helping search for birds and study areas. I am truly grateful for their assistance. I was not only impressed with their land management philosophy, but also by their forward-thinking regarding research.

In 2018, NCC’s Manitoba Region, led by regional vice-president, Kevin Teneycke, partnered with other organizations to begin a shorebird conservation initiative. They first established several International Shorebird Survey routes and then constructed several receiving antennas to detect birds carrying small radio transmitters (the Motus Wildlife Tracking System, for those who know it). While the project I was scouting for does not require the Motus system, the fact that it is already set up and ready to collect data certainly does give a researcher several ideas.

Not only did NCC provide suggestions for sites and send permits to access them, but one of its staff, Josh Dillabough, also graciously acted as my guide for two days. Josh was very familiar with the properties, birds and local history, and he really cares about his job and the people he works with. I was fortunate to have him as a guide! 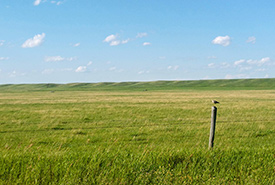 Two properties were made up mainly of grassland, while the others were a mix. (Photo by Paula Cimprich)

We visited four NCC properties and birded along the way. Two properties were made up mainly of grassland, while the others were a mix. Some of the highlights included seeing several bobolinks and upland sandpipers and hearing some grasshopper sparrows singing. We were also delighted to find a large flock of shorebirds made up of multiple species along Highway 254, including: 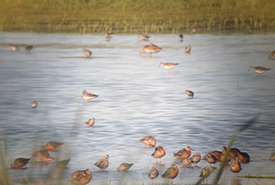 We were also delighted to find a large flock of shorebirds made up of multiple species along highway 254. (Photo by Paula Cimprich)

On a day when I explored one of the properties on my own, I was pleased to find several Baltimore orioles and gray catbirds. Perhaps my favourite part of this scouting trip, besides the birds, obviously, was the wonderful, peaceful atmosphere I enjoyed while birding around southwest Manitoba. I was able to stop along roads, get my bird scope out and not worry about being in the way of traffic, which really helped my search for birds because I was never rushed. 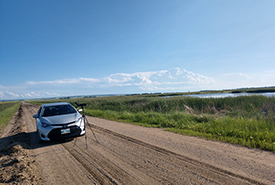 I was able to stop along roads, get my bird scope out and not worry about being in the way of traffic. (Photo by Paula Cimprich)

In the end, I was fortunate to find the birds that used the flyway, including sora, upland sandpiper and Franklin’s gull. The only species I couldn’t locate was black-crowned night heron, but this was not surprising for a few reasons. For one, they nest in small, highly localized areas called rookeries. It was also the end of their breeding season, and they tend to forage at night and rest secretively in marshes during the day.

Overall, I came away with a reasonable logistical plan for a project, largely thanks to NCC. The next step is to make sure this plan works with the rest of our collaborators. Thank you again to NCC's staff!

Paula Cimprich is a first-year PhD student in the Ecology and Evolutionary Biology Program at the University of Oklahoma.