The effects of single-use plastic on the environment 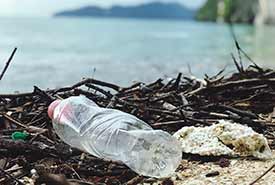 Discarded pastic bottle by the beach (Photo by Catherine Sheila,Pexels)

Did you know that an estimated 3.3 million tonnes per year of plastic waste is produced in Canada, but only nine per cent is returned for recycling? You might be surprised, but billions of items of plastic waste are entering our lands, oceans and rivers. Plastic pollution is a real issue. In fact, the effects of single-use plastic on the environment are not only unsightly but can also be devastating to wildlife and ecosystems.

Single-use plastic is typically used once, but it needs hundreds of years to break down in landfills. And about 86 per cent of Canada’s plastic waste ends up in a landfill. The remaining five per cent of the plastic is burned to create energy, which causes serious emission problems or enters the environment as litter.

Disposable plastics, such as plastic straws, bags, coffee stirrers, food packaging, and soda and water bottles, never break down completely. Instead, they degrade and become microplastics and continue to pollute the environment. So, here is the impact single-use plastic has on our environment.

Every year, countless animals are killed by plastic. Seabirds, fishes, turtles and marine mammals are found to have fishing gear or plastic bags in their stomachs. What’s more, approximately 700 species, even endangered species, have been affected by plastic. Animals die of starvation or entanglement. More than 100 aquatic species have been found to have microplastics in them. The plastic can pierce organs or block the digestive tract, causing death.

Animals with stomachs full of plastic have no urge to eat, and they die of starvation. Some animals mistake plastic bags for food, which is often the case with sea animals.

Currently, marine litter is 60 to 80 per cent plastic, which ultimately means that many sea creatures are, at one point or another, swallowing this seawater soup instilled with toxic chemicals from plastic decomposition.

The world’s oceans are packed with floating plastics, and the amount is constantly increasing. Processes such as wave motions, bacteria and seasonal changes affect the properties of the plastic in the ocean and convert them into the so-called microplastics, which are later eaten through plankton. These microplastics get in the mouth, stomachs and digestive system of fishes, shellfishes and birds, making it hard to breathe and eat. The non-decomposition of all these plastics becomes part of the food chain of aquatic and human life.

The North Pacific Ocean contains a gyre of marine litter, known as the Pacific Trash Vortex. This vortex has an exceptionally high concentration of single-use plastic that has been trapped by currents. It has had a devastating effect on the marine ecosystems and has been estimated to be twice the size of Texas. Plastics and microplastics both absorb and give off chemicals and harmful sealife. The plastic ingredients or toxic chemicals absorbed by plastics may build up over time and stay in the environment.

The plastics release a variety of chemicals during degradation, which has a negative impact on the animal and plant habitat. Once released, the gas emissions can be toxic and have adverse effects on the environment and human health.

In Canada, actions have been taken to reduce plastic waste. This includes a Canada-wide Strategy on Zero Plastic Waste, where government, industry, non-government organizations and academia work together to create more sustainable plastic waste management. 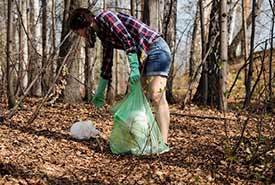 Woman picking up trash in a forest (Photo by Anastasia Gepp, Pixabay)

These are only some of the most common effects single-use plastic has on the environment. Although we’re far from a complete solution to this issue, making some small changes can actually make a huge difference. Each of us can switch to reusable shopping bags, food containers and produce bags and save throwing away a bunch of plastic bags every week. Start using eco-friendly products instead of disposable plastic and learn the proper way to recycle common plastics and reuse as much as possible. Avoiding the use of plastic straws, cutlery and balloons to reduce environmental harm. Support local businesses and buy local and in bulk. Avoid throwing your cigarette butts in the environment and instead find designated bins. Use a reusable bottle or mug for your beverages and a reusable bag or container for your food. You can also try a plastic-free week — the results are stunning!

Single-use plastic is a serious issue and should be properly addressed. If each of us becomes aware of the impact that plastic has on our environment, we could be one step closer to reducing it. 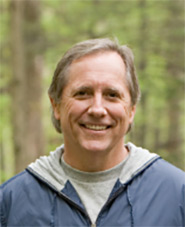 Donald Giddings is founder and editor in chief at Green Living Zone.