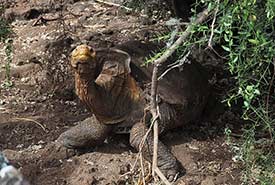 Each week, countless inspiring and informative stories are published about conservation successes or discoveries in nature and wildlife around the world. Here are some of the conservation and nature stories that caught our attention the week of June 15, 2020.

A 100-year-old Galapagos tortoise bows out of 50 years of service after fathering 800 offspring for the conservation of his species.

Pining for a natural predator

Pine marten, a native species that researchers hoped would act as biological control for invasive grey squirrels in UK, were found to avoid urban areas.

Dash to the story here >

Wild in the city

People have been submitting photos of wildlife spotted in Calgary, including a bobcat on the roof of a house.

“Peak” at the photos here >

New stars of the show

Two new black-and-white marble foxes made their debut at a wildlife park in Kamloops, BC.

Trot to the story here >

Ancient fish that gave us fingers

A 380-million-year-old fish fossil gives researchers new perspective on how the hands of four-limbed creatures evolved.

Snap to the story here >