The hurdles of the charisma-challenged 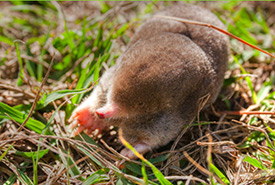 What do dodgeball and charisma-challenged species have in common? In elementary school, I was always, by far, the shortest kid in the class, and I barely cracked 80 pounds. In gym class, I was pretty much the last player chosen for the dodgeball team. Team captains likely overlooked me because I was petite, and they probably thought I would have trouble throwing the ball hard. But boy were they wrong. I was nimble and, as a gymnast, deceivingly strong. Turned out, I was just as important to my team as the big, burly boys or endomorphic girls who had the advantages of a growth spurt.

Who doesn’t feel their heart grow two sizes when they see a polar bear or an otter or a Canada lynx? You’d have to be a stone to not feel a connection to these charismatic animals.

But just because it’s cute and cuddly doesn’t mean it deserves more of our affection, protection and interest than the charismatically challenged.

But what about the underdog species? The ones who struggle to exude charisma and who may not pull on our heartstrings at first glance, but who deserve our attention just the same? Species like mottled sculpin, American ginseng or little brown bat. Don’t they play a role in our world? They sure do.

Everything on this planet is inter-dependent and important. If we only work to save the charismatic species, what happens to our variety of life, our biodiversity? If the slippery and slimy, or the species with a face-that-only-a-mother-could-love are ignored, what happens further up the food chain? What happens to our planet? Each species in an ecosystem has a specific role to play, and the benefits of a diverse ecosystem — of both the charismatic and charismatically challenged — are vast.

Take copper redhorse or mottled sculpin, for example. Sure, they may not be magazine cover model-worthy, but they still serve a very important role and have value. By understanding that all species have value, we intrinsically care about their future. The stories of these charismatically challenged species haven’t been told. Endemic to Canada, copper redhorse is a globally endangered freshwater fish. Pay it no attention because it ranks low on our “charm” scale and — bam! — it’s gone forever.

What about the eastern mole on the cover of this blog? It’s a species at-risk that is assessed as special concern by the Committee on the Status of Endangered Wildlife in Canada. The Nature Conservancy of Canada has helped protect and restore its habitat at Oxley Poison Sumac Swamp (talk about an uncharismatic name for a property!).

And if that isn’t enough to change our tune about showing the underdog species some lovin’, in the U.S., a study by Alejandro M. Bellon looks at whether a species’ charisma, among other factors, affects the amount of money allocated by the government toward its conservation.

Biodiversity is made up of more than just nature’s all-stars. Maybe it’s time we look beyond the pretty and the furry.

While the Atlantic mud-piddock and Banff Springs snail likely don’t play dodgeball, they too are equally important members of the biodiversity team.