The magic of seaweed 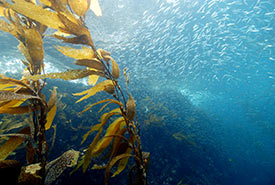 Along the Pacific Northwest, there are over 640 different species of seaweed. They come in many different shapes and sizes. However, they’re commonly grouped into three colours: brown, green and red. While these different species of seaweeds mix and mingle in the ocean and along the shores, they’re actually separated by “many millions of years of evolution,” according to Dr. Bridgette Clarkston, author of the must-have field guide, A Field Guide to Seaweeds of the Pacific Northwest.

The biodiverse world of kelp forests 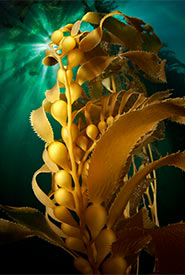 One amazing group of brown seaweed species are kelps. They can grow in such an abundance that they create incredibly biodiverse underwater forests. Some species form the forest canopy by growing as high as 50 metres tall, like bull kelp and giant kelp. Shorter species, like walking stick kelp, make up the forest understory.

These lush and biodiverse kelp forests are an oasis for life. In fact, they provide important habitats for many marine species, like starfish, salmon, rockfish and kelp crabs. They’re also a vital nursery for herring, which spawn (release eggs) on kelp that protect the eggs from predators.

The impact of the British Columbia sea otter reintroduction

In parts of the Pacific Northwest, sea otters play an essential role in the health of kelp forests. Because their feeding habits can trigger a huge cascade of changes, they’re considered keystone species. Sea urchins consume a lot of kelp. If their populations are left unchecked by predators, they can decimate whole forests. Because sea urchins are a tasty snack for sea otters, they keep them under control, which subsequently maintains the vitality of kelp forests.

In the 19th century, sea otter populations in the Pacific Northwest were nearly wiped out as a result of the fur trade. Between 1972 and 1979, 89 sea otters were reintroduced along the BC coast. Since they were protected under the Species at Risk Act, their population ballooned to roughly 6,000, causing kelp forests to grow twentyfold. This presented many benefits for British Columbia. The amount of marine life in the otter-populated region has increased by 37 per cent, kickstarting new fisheries. Carbon storage has also increased while the otter tourist industry has blown up, according to CBC. 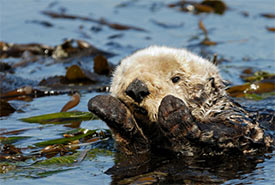 While many financially benefited from the otter reintroduction program, it’s important to note that it caused losses for many Indigenous and non-Indigenous coastal communities whose economies relied on abundant shellfish populations. With sea otters munching away at marine invertebrates, a recent study estimates that various clam, crab and sea urchin fisheries have seen a loss of $7.3 million. However, there are projects working to restore ecological, social and economic balance. Check out this Narwhal article exploring traditional food sources in Haida Gwaii and how combining traditional knowledge with western science is helping to restore balance in this out-of-whack coastal ecosystem.

While the single best way to combat climate change is to halt the human-produced carbon tap, many experts believe this won’t be enough to avert climate catastrophe. The International Panel on Climate Change stated that we need to actively remove carbon from the atmosphere to balance carbon emissions. While carbon capture technology receives a lot of attention, nature-based climate solutions offer many opportunities. As explained by Prof. Robert Newell in a previous NET blog, this term “describes approaches to tackling a variety of human challenges (such as food production, flood management, waste and wastewater, temperature change, etc.), which focus on enhancing ecosystems to address these issues.” Enhancing kelp forests is one such solution.

While forests get a lot of attention when it comes to capturing carbon, coastal ecosystems have an incredible capacity to mitigate the effects of climate change. They’re also not susceptible to wildfires like land-based forests, given their underwater habitat. In fact, coastal ecosystems “can sequester up to 20 times more carbon per acre than land forests,” as stated by scientists at Harvard University. This natural system is called blue carbon.

How do kelps sequester carbon? 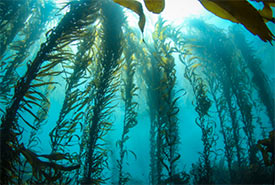 Carbon sequestration processes also occur in cold-water kelp forests. Large kelps, which are a type of macroalgae, transform carbon dioxide into seaweed biomass through photosynthesis. And because they grow incredibly fast (up to 60 centimetres per day), they suck up carbon at lightning speed. In fact, one study estimated that macroalgae sequester a whopping 200 million tonnes of carbon dioxide every year. Once carbon is locked into kelp, it can sink to the bottom of the sea and stored in ocean sediments or the kelp can be harvested for use.

Given kelp’s amazing carbon capture capacity, many scientists are calling for industrial-sized farms, where seaweed is grown to maturity, then harvested and sunk to the deep ocean, according to National Geographic. This would essentially ensure captured carbon is buried for thousands of years. However, research and development into these processes are still in their infancy.

How can you support kelp and coastal ecosystems?

1. Read this article from The Conversation to learn more about Marine Protected Areas.

2. If you live in a coastal community, reach out to your local leaders to find out how they’re supporting sustainable ecosystem management.

3. Talk to your family and friends about the importance of Marine Protected Areas.

This post originally appeared on the National Envioronmental Treasure's blog and is reposted with permission.