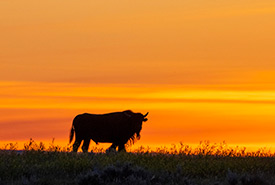 Bison and a sunset at OMB, SK (Photo by Jason Bantle)

Matthew Braun is program director for the Nature Conservancy of Canada’s (NCC’s) Working Landscapes Program in Saskatchewan, and Simon Neufeld is director of research and development for Earth Alive Clean Technologies in Quebec, a manufacturer of natural microbial products for agriculture and other industries. Matthew and Simon have been friends since their college days. Their passion for finding creative ways of connecting to nature has kept them motivated in their work and play and has fostered a love and respect for the places that sustain them.

About Old Man on His Back Prairie and Heritage Conservation Area

Located in the southwest corner of Saskatchewan, NCC’s Old Man on His Back Prairie and Heritage Conservation Area (OMB) is a 5,260-hectare working ranch that is part of the largest tract of native prairie habitat remaining in Canada. In 2003, 50 plains bison were introduced here from Elk Island National Park. The herd is maintained at around 80 individuals, and they graze about half of the property year-round, while cattle from local ranchers seasonally graze the rest. In addition to its ecological and economic significance, OMB is rich in cultural history.

Check out this video of five bisons being added to the OMB herd in 2019:

Matthew and Simon invite you to sit back, take a deep breath and remember a time when you were out for a nature walk or camping. Do you recall the birdsongs, the flutter of leaves, maybe the coyotes howling or the sound of water splashing onto a shore? Well, Simon is working on a special project that is converting data points to musical notes and helping bison play a song of the Prairies, bringing new meaning to the sounds of nature. Here’s how it came to life: 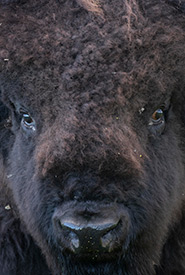 Close up of a plains bison (Photo by Jason Bantle)

Matthew: In Saskatchewan, most NCC-managed grasslands are grazed to, as close as possible, match the conditions created by herds of bison, which shaped the prairie grasses, flowers, insects, mammals and birds living there that we are trying to conserve. While most of these properties are grazed by cattle, OMB’s herd of bison gives us an opportunity to test different ideas about managing these grasslands even closer to their historic conditions.

In 2018, NCC staff, in conjunction with several different agencies, conducted a nine-hectare prescribed burn at OMB. This was part of a University of Saskatchewan research project investigating how fire affected the movement of bison and livestock.

During the winter of 2017, nine bison were fitted with GPS collars to see if they spent more time in the areas where the prescribed fire occurred (where the new grass was freshest). After a year of data collection, the GPS collars were removed, and their movements were plotted. The research was testing if regrowth after the prescribed fire would change how bison moved across the landscape and use the grass. Researchers provided Simon with 149,000 lines of bison GPS data from those collars, as well as thousands of points of plant data.

Simon: Now, you are probably wondering how I went from “there are bison getting tracked with GPS collars,” to “I’m going to make some music with this data.”

I had these insanely huge Excel spreadsheets showing where the bison were each hour of the year, and I knew they were moving around based on a host of factors, like the availability of water or food, or the position of the land on a hill or in a valley. My idea was to apply musical scales to these different landscape characteristics, and then let the movement of the bison over time determine which notes of the scales get “played,” moment by moment.

I like to think of the bison as the musicians in this project, as each of them was moving over the landscape and, so, were choosing which notes to “play.” Obviously, that’s just my imagination!

The last step was to represent what was happening visually by creating a video showing the movement of the bison as they generated the music. There are nine dots moving around the pasture — each of which is one bison — and each is playing one of six different musical scales based on a different landscape factor. I gave them different symbols so you can tell them apart:

The green symbols generate pitches in a different way. Vegetation biomass data (the weight of plant material within a given area) was collected from the centre of each study plot on OMB. I drew rings around each sampling location, and then assigned pitches to the rings based on how much vegetation was collected at that point. The bison that are playing the biomass data are silent until they show up inside one of the rings. 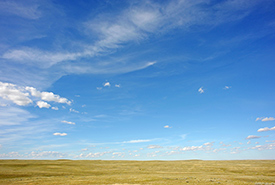 OMB is a haven for nature photographers of all skill-levels. (Photo by Mark Taylor)

Matthew: OMB is a draw for people, for different reasons. Every year, people visit from across Canada after reading Sharon Butala’s books that reflect on the fierce beauty of the landscape. Others come to see the bison roam the hills and valleys, and add a couple of birds to their life list. I imagine some might even come just to be in a place with very few people and marvel at the lack of lights and noise compared to their city homes. Simon, you found a way to showcase the beauty of lines and lines of data meant for a science experiment.

Simon: And I hope in some small way my music can help inspire others to connect in a personal way with their own places!