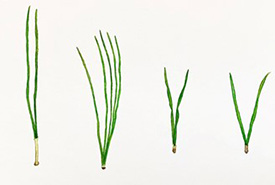 Play a game of Guess Who? with pine needles from four species (Painted by Mena Wallace)

Trees are a wonderous thing. Most of the time we barely notice them amid the scurry of our busy days, but every now and then you encounter a showstopper. I’m always on the lookout for a new tree to discover because species identification is so fun.

Camping in Algonquin Park instilled a particular love for pine trees! It’s there that I learned of the eastern white pine, red pine and Jack pine. It wasn’t until I started my internship with the Nature Conservancy of Canada in Norfolk County that I learned of the Scots pine. Scots pines are an invasive species in Ontario and part of my internship was learning and executing the best practices for removing this invasive species. By removing the invasive Scots pine from NCC properties, we help encourage more biodiversity. Other types of pine can be found in Ontario, but I’d like to focus on these four pine trees.

Learning to identify these pine trees has been really interesting, so much so that I made a little guessing game for my friends and family! Try to stump your family and friends with this one (can you name all four species of pine)? I collected pine needles off fallen branches on a trail after a windstorm on an NCC trail while doing maintenance. I laid the needles from each tree on a piece of paper, listed off the names of the trees and let the guessing begin. Another fun way is to paint or draw your own pine needles if you’re feeling creative. 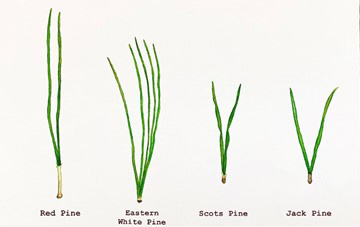 This game gives you the great opportunity to teach your family and friends how to identify trees by their needles. Your first clue is the number of needles in a bunch. Pine needles grow in bunches on the branch. The easiest one to spot out of this selection is eastern white pine, as they have five needles clustered together. The rest of these pine trees all have two needles. Red pine has long needles with more of a sheath at the base of the cluster. Now the tricky ones — Scots pine and Jack pine needles both have two twisted needles, but Scots pine has more of a twist, while Jack pines create a sort of “V” shape. Interestingly, the tightly resin-closed Jack pine cones need extreme heat to open, so cones can sometimes stay on the tree for 20 years or longer!

Fun fact: Jack pines became symbolic of the great northern Ontario landscape when Group of Seven artist Tom Thomson painted ”The Jack Pine.” The original painting can be seen at the National Gallery of Canada in Ottawa.

So next time you're outside, try out your pine identification skills and see if there are other new trees that catch your eye! Bonus points for adding your observations to iNaturalist. Adding observations to iNaturalist is a great way to contribute to community science and conservation efforts, like invasive species control. Species identification is a tool that comes in handy every single day with the Nature Conservancy of Canada! Learning how to identify species is the first important step in conservation, so we can identify the problem and get to solving! 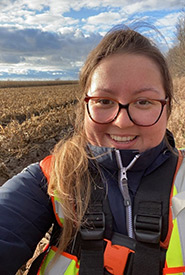 Mena Wallace was a was a fall/winter conservation intern in 2021/2022 with the Nature Conservancy of Canada's Norfolk office in southern Ontario.